Terryville is a census-designated place (CDP) in Litchfield County, Connecticut, United States, and is the largest village within the town of Plymouth. In the 2010 census, Terryville had a population of 5,387, out of 12,243 in the entire town of Plymouth. The village is named for Eli Terry Jr., the son of the well-known clockmaker Eli Terry Sr. Terryville is also home to the Lock Museum of America. There is a water wheel located in downtown Terryville that is dedicated to the son of Eli Terry Sr. 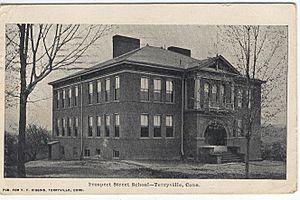 All content from Kiddle encyclopedia articles (including the article images and facts) can be freely used under Attribution-ShareAlike license, unless stated otherwise. Cite this article:
Terryville, Connecticut Facts for Kids. Kiddle Encyclopedia.