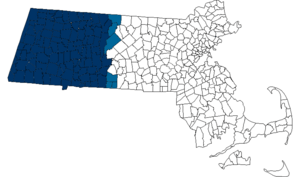 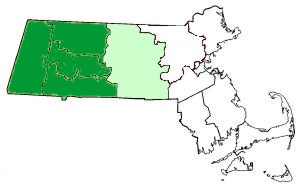 Hampden County, with about two thirds of the population of western Massachusetts, includes the City of Springfield; to the north, Hampshire County contains the college towns of Northampton, Amherst and South Hadley; further north, rural Franklin County borders Vermont and New Hampshire; to the west is Berkshire County, bordering New York, Vermont and Connecticut and the other three counties.

Subsequent to the elimination of the Franklin, Hampshire, Hampden, Berkshire and Worcester county governments (along with several other but not all of the Massachusetts counties) in the late 1990s, most county functions were assigned to the state government. The municipalities of Franklin and Hampshire counties subsequently organized two voluntary county-oriented "regional councils of government".

New England's largest river, the Connecticut, flows through the center of its agricultural valley. Nearly bisected by the American east coast's only east-west mountain ranges (the Holyoke Range and the Mount Tom Range,) this relatively small area contains a number of college towns, urban environments, and rural hamlets. The portion of this valley in Massachusetts is also commonly referred to as the Pioneer Valley.

At its southern tip, the Springfield-Hartford region is home to 29 universities and over 160,000 university students - the United States' 2nd highest concentration of higher learning institutions after the Boston Metropolitan area.

Innovations originating in the valley include the sports of basketball (James Naismith, 1895) and volleyball (William Morgan, 1895); the first American automobile (Duryea, 1893); the first motorcycle company (Indian, 1901); the first use of interchangeable parts in manufacturing (Thomas Blanchard, 1825); and the first commercial radio station, (WBZ, 1920, from Springfield's Kimball Hotel).

The Connecticut River Valley is an ancient downfaulted graben or rift valley that formed during the Mesozoic Era when rifting developed in the Pangaea supercontinent to separate North America from Europe and South America from Africa. Secondary rifts branched off the main crustal fracture, and this one was eventually occupied by the Connecticut River. The Metacomet Ridge is a series of narrow Traprock ridges where lava penetrated this rift zone, beginning at the northern end of the graben near Greenfield and extending south across Massachusetts and Connecticut to Long Island Sound. Fossil dinosaur footprints in Holyoke attest to the life present in this region during the Mesozoic.

As continental glaciers receded near the end of the last glacial period, a moraine at Rocky Hill, Connecticut dammed the river to create Lake Hitchcock, extending northward some 200 miles (320 km.) inundating places such as Springfield, Agawam, and West Springfield, while certain highlands remained above water, (i.e. sections of Holyoke.)

Accumulation of fine sediments iduring the era of Lake Hitchcock accounts for this region's exceptionally rich agricultural soil, which attracted settlers as early as 1635. Although the Connecticut River Valley's soil is the richest in New England, many of its fields have been covered by urban and suburban development. Regardless, the valley remains New England's most productive farmland. Tobacco, tomatoes, sweet corn, and other vegetables are still produced there in commercial quantities.

The Berkshires have long been patronized by artists (e.g. Herman Melville, who wrote Moby-Dick while living in Pittsfield; Edith Wharton, who wrote The House of Mirth and Ethan Frome while living in Lenox; and Norman Rockwell, many of whose painting were based on scenes that he observed in the town of Stockbridge. Cultural opportunities include Lenox's Tanglewood, Becket's Jacob's Pillow, and Stockbridge's Norman Rockwell Museum. The city of Pittsfield is the largest community located in the Berkshires.

By convention the Berkshires are confined to Berkshire County at the western end of Massachusetts, however geologically they are a westward continuation of uplands west of the Connecticut River and a southern extension of Vermont's Green Mountains. Maximum upland elevations increase nearly 1,000' (300 meters) from east to west, and 400' (120 meters) from south to north, so maximum elevations of The Berkshires proper are about 2,000' (600 meters) in the southwest and 2,400' (730 meters) in the northwest. The practical limit of agriculture is somewhat below 2,000' (600 meters). Above this climate and ecology become increasingly boreal with acidic soils.

The Hilltown-Berkshire upland ends at the valley of the Housatonic River which flows south to Long Island Sound, and in the extreme north west of Massachusetts at the Hoosic River, a tributary of the Hudson. From these valleys, uplands to the east appear as a rounded mountain range, rising some 1,600 feet (500 meters) although they are actually a plateau. West of the Housatonic-Hoosic valley system rises the narrower Taconic Range along the New York border. Upper tributaries of the Hoosic separate Massachusetts' highest peak, Mount Greylock 3,491' (1,064 meters) from both ranges, however Greylock's geology connects it with the Taconics.

The Quabbin and Quaboag Regions

In northern Massachusetts, the higher altitude area to the east of the Connecticut River Valley is known as the North Quabbin region. These northern municipalities include Warwick, Orange, Petersham, Phillipston, Wendell, New Salem, and Athol near the New Hampshire border.

The South Quabbin region (formerly the Swift River Valley) includes the towns of Barre, Belchertown, Pelham, Ware, Hardwick, Leverett, and Shutesbury. This area once included the four "Lost Towns" of Enfield, Dana, Greenwich, and Prescott, which were destroyed to make way for the Quabbin Reservoir.

Geology is similar to the Hilltown-Berkshire uplands with resistant metamorphic rocks overlain by thin and rocky soil. With less relief, the river valleys are less pronounced, but still moderately high gradient. The Quaboag Hills and Valley, the Quabbin Regions, and populated places stretching east towards Worcester are all locally known as "Hill Towns;" a term interchangeable with the Hill Towns west of the Pioneer Valley.

The Hilltowns include the areas of Berkshire, Franklin, Hampshire, and Hampden Counties west of and above the escarpment bordering the ancient rift valley through which the Connecticut River flows. Elevations increase from about 200 feet (60 meters) to at least 1,000 feet in the escarpment zone. On top, elevations rise gradually to the west. Williamsburg in Hampshire County and Becket in Berkshire County are prominent Hilltowns. Generally, the Hilltowns west of the Connecticut River Valley were less attractive for agricultural uses, which resulted in later migration there than, for example, the fertile Connecticut River Valley. Subsistence farming predominated in this area.

The 1,000 foot (300 meter) elevation difference between uplands and the Connecticut River Valley produced streams and rivers with gradients around 40'/mile (8 meters/km.) flowing through steep-sided valleys, notably the Westfield and Deerfield Rivers and their larger tributaries. Mills were built to exploit the kinetic energy of falling water and mill towns grew up around them, or company towns integrating production, residential and commercial activities.

The development of steam engines to free industrialization from reliance on water power brought about the so-called Second Industrial Revolution when railroads were built along the rivers to take advantage of relatively gentle grades over the Appalachians. And so as hilltop farming towns declined in importance, industrial towns in the river valleys rose to local prominence.

Most of this region is a rolling upland of schist, gneiss and other resistant metamorphics with intrusions of pegmatite and granite. Scraping by continental glaciers during the Pleistocene left thin, rocky soil that supported hardscrabble subsistence farming before the Industrial Revolution. There was hardly a land rush into such marginal land, but the uplands were slowly settled by farmers throughout most of the 18th century and organized into townships. Then in the early 1800s better land opened up in Western New York and the Northwest Territory. The hilltown agricultural population went into a long decline and fields began reverting to forest.

Western Massachusetts' population is concentrated in the cities and suburbs along the Connecticut River in an urban axis surrounding Springfield that is contiguous with greater Hartford, Connecticut (i.e. the Knowledge Corridor.) A secondary population concentration exists in the Housatonic-Hoosic valley due to the industrial heritage of Pittsfield and North Adams, and the development of tourism throughout that valley. This far-western zone is linked to New York City and Albany, New York more than with the rest of Massachusetts, however both populated zones are ultimately part of the northeast megalopolis. The rest of Western Massachusetts is lightly populated, particularly the Hilltowns where densities below 50 persons per square mile (20 per km2) are the rule.

Western Massachusetts was originally settled by Native American societies, including the Pocomtuc, Nonotuck Mohawk, Nipmuck, and Mahican. The first European explorers to reach Western Massachusetts were English Puritans, who in 1635, at the request of William Pynchon, settled the land that they considered most advantageous for both agriculture and trading - in modern Agawam, adjacent to modern Metro Center, Springfield. In 1636, a group of English settlers—lured by the promise of a "great river" and the northeast's most fertile farmland—ventured to Springfield, where they established a permanent colony. Originally, this settlement was called Agawam Plantation, and administered by the Connecticut Colony. (Springfield lies only 4 miles north of Connecticut; however, Agawam included lands as far south as Windsor Locks, as far north as Holyoke, and as far west as Westfield.) In 1640, Springfield voted to separate from the Connecticut Colony following a series of contentious incidents, and after a brief period of independence, decided to align with the coastal Massachusetts Bay Colony, thereby shaping the region's political boundaries. The Massachusetts Bay Colony settled the Connecticut River Valley's most fertile land - stretching from Windsor, Connecticut, (once part of Springfield,) to Northampton, Massachusetts - from 1636 to 1654.

In 1675, at the insistence of Chief Metacomet, Springfield was burned to the ground during King Philip's War. Thus began a contentious period between the English settlers and the previously amenable Western Massachusetts Natives. In 1704, the French and their Native American allies led a Raid on Deerfield, Massachusetts, and ultimately burned it to the ground.

In 1777, George Washington and Henry Knox selected Springfield for the site of the fledgling United States' National Armory. Built atop high bluff overlooking the Connecticut River, Washington and Knox agreed that Springfield provided an ideal location—beside a great river and at the confluence of major rivers and highways—it was also easily defensible, due to its position just beyond the Connecticut's tidal influence. For the following 200 years, the Springfield Armory would bring concentrated prosperity and innovation to Springfield and its surrounding towns.

After the American Revolution, a rebellion led by Daniel Shays, a Revolutionary War veteran from East Pelham, culminated in a battle at the National Armory in Springfield. Shays and his followers, the Shaysites, hoped to win government reforms, including the issue of new currency and help for Continental soldiers who had incurred debts while fighting for independence. Shays' Rebellion is often considered the watershed event in the creation of the United States Constitution. Although crushed, this rebellion led Thomas Jefferson to declare that "a little revolution every twenty years or so is a good thing."

Whereas Western Massachusetts was once the Republican stronghold in an otherwise heavily Democratic state, it is now consistently viewed by political analysts as one of the most politically liberal regions in the United States. In 2006 and 2010, the region voted heavily in favor of Democratic gubernatorial candidate Deval Patrick.

In Crash!ng the Party, Ralph Nader includes Western Massachusetts, along with Vermont and his home state of Connecticut, as one of the few places in the country where he believes small-town spirit is still strong. In a 2010 editorial, the Boston Globe berated communities in northern Western Massachusetts for resisting efforts to force consolidation of local school districts. In response, the Franklin County School Committee Caucus released a map that overlaid the county north-to-south over Metro Boston. The overlay reached from Rhode Island in the south to New Hampshire in the north and Framingham in the west.

All content from Kiddle encyclopedia articles (including the article images and facts) can be freely used under Attribution-ShareAlike license, unless stated otherwise. Cite this article:
Western Massachusetts Facts for Kids. Kiddle Encyclopedia.