New Salem is a town in Franklin County, Massachusetts, United States. The population was 983 at the 2020 census. It is part of the Springfield, Massachusetts Metropolitan Statistical Area.

New Salem was first settled in 1737 and was officially incorporated in 1753, named for the settlers from Salem that founded the town. New Salem benefited greatly by the building of the Quabbin Reservoir - though mostly geographically. Prior to its building, New Salem, which has always been the southeast corner of Franklin County, did not extend much further south than the village of Cooleyville, now along U.S. Route 202. However, with the forming of the reservoir, the town received all lands above the water line between the two forks of the reservoir, as it was the only land connection to the peninsula. With its southern borders now following former branches of the Swift River, New Salem now includes most of the former town of Prescott (except for a small corner east of the Middle Branch of the Swift River, which is now in Petersham), and parts of Greenwich and Enfield. (All of the northern half of Prescott had once belonged to New Salem; the southern half was originally part of Pelham, but was annexed to Prescott in the latter nineteenth century.) All the lands gained by the annexation were once part of Hampshire County.

Today most of the lands it gained are off-limits, protected as part of the Quabbin Reservation, which is administered by the Massachusetts Department of Conservation & Recreation (DCR). The Five College Radio Astronomy Observatory, until 2011, lay along what was once the Prescott-Greenwich town line, and researchers from the Five Colleges were allowed access to it. Additionally, members of the Swift River Historical Society take a yearly tour of the area in the peninsula by bus. No other access is permitted. 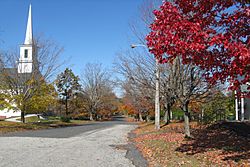 According to the United States Census Bureau, the town has a total area of 58.6 square miles (151.9 km2), of which 44.8 square miles (116.0 km2) is land and 13.9 square miles (36.0 km2), or 23.69%, is water. Because of the lands of the Prescott Peninsula, New Salem is the largest town by area in Franklin County and the largest community by area in western Massachusetts (Hampden, Hampshire, Franklin, and Berkshire counties). It is the twenty-first largest of 351 cities and towns in the Commonwealth. New Salem's modern southern town lines are dictated by the former West and Middle Branches of the Swift River, which are now submerged as part of the Quabbin Reservoir. The land of the two forks of the reservoir is now known as the Prescott Peninsula, containing the highest points in town, at Mount Pleasant and Prescott Hill (the latter of which was part of Pelham). The town owns several islands in the reservoir as well, including those around Russ Mountain and Mount L. Much of the original town land was high ground, sloping down eastward towards the marshes near Lake Rohunta, along the Athol town line. A small section of state forest is located near this lake, with other small sections scattered in the western part of the former town.

New Salem lies at the southeastern corner of Franklin Valley, with its lands extending southward between Hampshire County and Worcester County. The town is bordered by Orange to the north, Athol to the northeast, Petersham to the east, Ware to the south, Belchertown to the southeast, and Pelham, Shutesbury and Wendell to the west. Because of the reservoir, there is no land link between New Salem and Pelham, Belchertown or Ware. From the town common, New Salem lies 19 miles (31 km)miles east-southeast of the county seat of Greenfield, 35 miles (56 km) miles north-northeast of Springfield, 40 miles (64 km) northwest of Worcester and 75 miles (121 km) west of Boston.

The town has no interstates or limited-access highways, lying just south of Massachusetts Route 2, the major east-west route through northern Massachusetts. Its easiest access lies along U.S. Route 202, which runs from Pelham in the west and through the town's center before heading north into Orange and towards Route 2. For approximately the last half-mile the route is in New Salem, it is concurrent with Massachusetts Route 122, which enters New Salem through Petersham, heading northwest towards Route 202 before both enter Orange and split shortly thereafter.

The nearest general aviation airport is Orange Municipal Airport to the north, and the nearest national air service can be reached at Bradley International Airport in Connecticut, some 50 miles (80 km) south of town.

There were 379 households, out of which 30.3% had children under the age of 18 living with them, 59.6% were married couples living together, 8.2% had a female householder with no husband present, and 30.3% were non-families. 21.6% of all households were made up of individuals, and 7.9% had someone living alone who was 65 years of age or older. The average household size was 2.45 and the average family size was 2.88.

All content from Kiddle encyclopedia articles (including the article images and facts) can be freely used under Attribution-ShareAlike license, unless stated otherwise. Cite this article:
New Salem, Massachusetts Facts for Kids. Kiddle Encyclopedia.