Department of Conservation and Recreation facts for kids

The Department of Conservation and Recreation (DCR) is a state agency of the Commonwealth of Massachusetts, situated in the Executive Office of Energy and Environmental Affairs. It is best known for its parks and parkways. The DCR's mission is "To protect, promote and enhance our common wealth of natural, cultural and recreational resources for the well-being of all." The agency is the largest landowner in Massachusetts.

The Department of Conservation and Recreation was formed in 2003 under Governor Mitt Romney, when the former Metropolitan District Commission (MDC) and Department of Environmental Management (DEM) were merged to form the DCR.

Ownership and management for many non-pedestrian bridges was transferred to the Massachusetts Department of Transportation in 2009.

and several bureaus, offices, and other work units, including (but not exclusively) 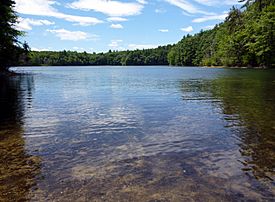 The Division of State Parks is responsible for the maintenance and management of over 310,000 acres (1,250 km2) of state-owned forests and parks. These areas are designated as either Woodlands, Parklands, or Reserves, and are managed to maintain specific land-use characteristics.

Within the greater Boston area there are urban wilds, historic sites, and other naturally aesthetic or significant environmental properties. The origins of the collective environments in this part of the division date back to the creation of the Metropolitan Park Commission in 1893, forming the first such regional system in the United States. (see Metropolitan Park System of Greater Boston for history).

Lands outside of the greater Boston area includes some 29 campgrounds, over 2,000 miles (3,200 km) of trails, 87 beaches, 37 swimming, wading, and spray pools, 62 playgrounds, 55 ballfields, 145 miles (233 km) of paved bike and rail trails and once private homes and estates that are now a part of the DCR's Historic Curatorship Program.

The Division of Water Supply Protection manages 150,000 acres (610 km2) of watershed lands and is responsible for the protection of the drinking water supply for approximately 2.5 million residents of Massachusetts, primarily in Greater Boston. This division monitors lakes and ponds, well drillers, and rainfall throughout the Commonwealth.

The Bureau of Engineering provides professional engineering, design, and construction management services in support of DCR properties. In addition to providing engineering services for over 450,000 acres (1,800 km2) of parks, forests, watersheds, beaches, 340 dams, and numerous recreational facilities, the Bureau of Engineering also manages over 525 lane miles of parkways and nearly 300 bridges and tunnels notable for their landmark stature and importance in the Commonwealth’s transportation system.

The Bureau operates under the direction of a Chief Engineer and is sub-divided into six operating units:

The Bureau is responsible for the management of the majority of the DCR's annual capital budget which has declined in recent years from a $150–200 million high to a current $70–80 million.

The Bureau of Engineering manages and/or operates a number of parkways across the Commonwealth, including: 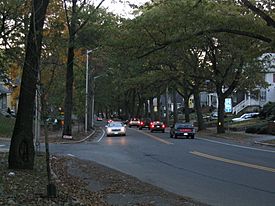 The Bureau of Engineering managed and/or operated a number of bridges across the Commonwealth prior to November 2009. All non-pedestrian bridges were transferred to the Massachusetts Department of Transportation on November 1, 2009 as part of a transportation reform law. Originally, a certain number of bridges listed in the act creating MassDOT were to be transferred after December 31, 2014 when ongoing construction was completed. However, a Memorandum of Agreement between DCR and MassDOT instead transferred these bridges in 2009 along with all other DCR vehicular bridges.

A partial listing of notable bridges formerly under the DCR, with the exception of pedestrian bridges still managed by the department and listed here, include:

The Bureau of Engineering owns and manages and/or operates a number of dams and flood control facilities across the Commonwealth, including:

DCR is responsible for the stewardship of its lands, from general maintenance—such as emptying trash barrels, cutting grass, and making building improvements—to landscape-level management.

DCR also provides services beyond its boundaries, For example, Bureau of Forest Fire Control is available to aid and assist local cities and towns during natural disasters as well as periods of high fire danger, while its Bureau of Forestry administers forest management on both state and private lands.

In addition to partnering with state agencies, DCR coordinates with local and national volunteer organizations, such as the Mystic River Watershed Association, Friends of the Middlesex Fells, Appalachian Mountain Club, and local student organizations.

All content from Kiddle encyclopedia articles (including the article images and facts) can be freely used under Attribution-ShareAlike license, unless stated otherwise. Cite this article:
Department of Conservation and Recreation Facts for Kids. Kiddle Encyclopedia.