The other roadways, listed in 2006, extend from Harvard Square to Newton Upper Falls. The roads on the river banks were improved at the beginning of the 20th century to provide a continuous route through the park.

The eastern parkways are within the Charles River Reservation, extending from Harvard Square to the vicinity of Watertown Square in Watertown and Newton. 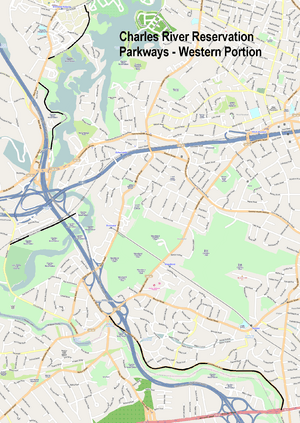 The western parkways are within the Upper Charles River Reservation. They comprise several discontiguous segments in Waltham, Weston, and Newton. The stretch of the Charles they abut are between Sawyer Road in Waltham and Route 9 near its interchange with I-95.

The Charles River parkways were laid out in concept in a plan developed by landscape architect Charles Eliot for the Metropolitan Parks Commission (MPC, predecessor to the Metropolitan District Commission (MDC), now the Massachusetts Department of Conservation and Recreation, or DCR). Land acquisition for the parks lining the Charles began in 1895, with park and parkway construction beginning soon afterward. The western portion of Soldiers Field Road was one of the first to be built, as part of the Charles River Speedway, an early racing oval, between 1899 and 1910. Other roads completed by 1910 include the listed portions of North Beacon Street, Greenough Boulevard, and Charles River Road. Nonantum Road was built between 1910 and 1931. Leo Birmingham Boulevard was completed in 1936, as a bypass around a slaughterhouse on the river that the MDC had been unable to acquire. It was eventually taken in the 1940s, allowing for the completion of Soldiers Field Road.

The master plan for the upper river was predicated on acquiring sufficient land for the building of continuous roadways, which was precluded by dense land use in portions of Watertown and Waltham. The oldest of the roads is Quinobequin Road, built in 1900. Recreation Road and Norumbega Road were both built in the 1930s. Recreation Road has since been impacted by the construction of both Interstate 95 and the Massachusetts Turnpike, which have cut off elements of the waterfront from land access.

All content from Kiddle encyclopedia articles (including the article images and facts) can be freely used under Attribution-ShareAlike license, unless stated otherwise. Cite this article:
Charles River Reservation Parkways Facts for Kids. Kiddle Encyclopedia.