The Old Harbor Reservation Parkways are three historic roads in the Old Harbor area of Boston. They are part of the Boston parkway system designed by Frederick Law Olmsted. They include

These roadways follow the southern shoreline of South Boston west from Castle Island, and surround what is now known as Joe Moakley Park. The southernmost point of these roadways is Kosckiuszko Circle. The roadways were added to the National Register of Historic Places on July 24, 2008. 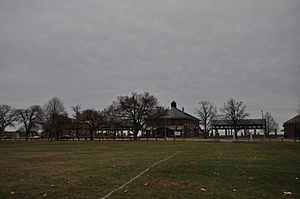 When Frederick Law Olmsted drafted his plans for Boston's Emerald Necklace of parks in the 1870s, it included the notion of a connection between Franklin Park and the coastline of South Boston and Dorchester, with a waterfront park area. The first formal proposal for the parkland that is now Joe Moakley Park and the causeway connecting Castle Island to the mainland were submitted by Olmsted in the 1880s. Implementation of these plans was delayed in part because Castle Island was still under federal military jurisdiction.

Because of this, the causeway that opened in 1892 was separated from Castle Island by a drawbridge, and it was on that that the oldest of the parkways (originally Gardner Way, now the eastern half of Day Boulevard) was opened. The island would not be fully connected until the 1930s. The development of Joe Moakley Park and the surrounding parkways was planned as part of the connection between Franklin Park and Marine Park (the eastern end of Day Boulevard), with land takings beginning in the 1890s. Old Colony Avenue was laid out in 1898 on a former railroad right-of-way, but the Strandway (now the southern part of Day Boulevard) was not completed until the 1920s. Later aspects of this work were designed by Olmsted protege Arthur Shurcliff.

All content from Kiddle encyclopedia articles (including the article images and facts) can be freely used under Attribution-ShareAlike license, unless stated otherwise. Cite this article:
Old Harbor Reservation Parkways Facts for Kids. Kiddle Encyclopedia.