Castle Island is located on Day Boulevard in South Boston on the shore of Boston Harbor. It has been the site of a fortification since 1634. Castle Island was connected to the mainland by a narrow strip of land in 1928 and is thus no longer an island. It is currently a 22-acre (8.9 ha) recreation site and the location of Fort Independence.

First named Castle William by the English, who were fighting the French for control over North America. One of the more famous figures to be imprisoned at the Fort was privateer Pierre Maisonnat dit Baptiste (1702–06).

The fort was renamed Fort Independence in 1797 and is one of the oldest fortified sites in British North America. In the late 18th-century it served as the first state prison in Massachusetts. The present structure, built between 1833 and 1851, is the eighth generation of forts. It is listed on the National Register of Historic Places.

During the Siege of Boston at the start of the American Revolution "Castle William" served as the main base of military operations for the British. The leaders of the Massachusetts royal administration took refuge there with their families, as did some prominent loyalists or "tories." Major Pelham Winslow of the prominent loyalist town of Marshfield, Massachusetts was the Commander of Castle William for a time during the Revolution. After the March 17, 1776 British Evacuation of Boston, Castle William was destroyed a few days later (March 20, 1776).

Long recognized for its strategic location, a new fort on Castle Island built by the war department beginning in 1801 helped protect Boston from British attack during the War of 1812. The island is also the site of a monument to Donald McKay, the builder of the famous clipper ships Flying Cloud and Sovereign of the Seas. The monument faces across Boston Harbor towards East Boston, where McKay built his ships.

Castle Island was originally some distance offshore, but land reclamation for expansion of port facilities has extended the mainland towards it, and it is now connected to the mainland by pedestrian and vehicle causeways. Today it is operated as a state park by the Massachusetts Department of Conservation and Recreation and is open to tours in the summer. 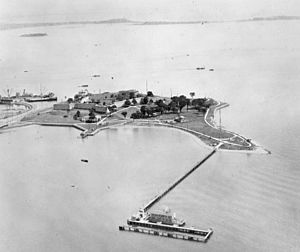 Local lore has it that an unpopular officer was walled up in the fort's dungeon following a duel in which he killed a more popular man. Edgar Allan Poe learned of the legend while serving on Castle Island in the Army, and his short story "The Cask of Amontillado" is said to be based on it.

During World War II the U.S. Navy used the site for a ship degaussing station.

As a visitor attraction

Castle Island is open to the public year-round. Interpretive programs are conducted by the Castle Island Association in conjunction with the Massachusetts Department of Conservation and Recreation.

All content from Kiddle encyclopedia articles (including the article images and facts) can be freely used under Attribution-ShareAlike license, unless stated otherwise. Cite this article:
Castle Island (Massachusetts) Facts for Kids. Kiddle Encyclopedia.