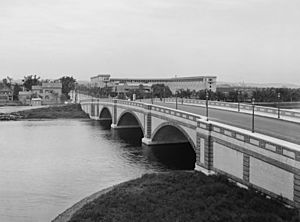 The Anderson Memorial Bridge in the 1910s

Anderson Memorial Bridge (commonly but incorrectly called Larz Anderson Bridge) connects Allston, a neighborhood of Boston, and Cambridge. The bridge stands on the site of the Great Bridge built in 1662, the first structure to span the Charles River. It brings Boston traffic (from North Harvard Street) into Harvard Square (via JFK Street) and was finished in 1915.

Often assumed to be named after Larz Anderson, the bridge was actually built by him as a memorial to his father, Nicholas Longworth Anderson. To do so, Anderson was helped by the huge family fortune of his wife, Isabel Weld Perkins. According to the Metropolitan Park Commission of 1913:

The Anderson Memorial Bridge replaces the inadequate, old wooden draw bridge which for many years had marked the former condition of the banks of Charles River. The new bridge was made possible by the gift of the Honorable Larz Anderson as a memorial to his father, a gallant general of the United States Army, Nicholas Longworth Anderson, renowned for his part in the Civil War...

The bridge was designed by the architectural firm of Wheelwright, Haven and Hoyt and completed under the direction of John R. Rablin, chief engineer for the Metropolitan District Commission.

From 2012 to 2016 MassDOT rehabilitated the Anderson Memorial Bridge at a cost of $25 million.. The project repaired the arches and replaced the parapets, sidewalks, lighting, and the bridge deck. The bridge now has three lanes of traffic (two northbound and one southbound) and one bicycle lane.

Anderson Memorial Bridge is constructed of reinforced concrete accented by red brick. The bridge's spandrel walls and panels are fashioned to give the illusion of rough-hewn stone. It has a Georgian Revival design with neoclassical influences that visually connect it to the other bridges that span the Charles as well as the nearby buildings of Harvard University. Architectural author Douglas Shand-Tucci writes:

In that splendid bridge one sees a distinctive architectural mode originally adopted for Harvard athletic facilities, a mode characterized by the distinctive use of concrete-wall fields dressed with red brick decorative trim...Wheelwright endowed the Anderson Bridge not only with the concrete and brick decorative scheme, but with extraordinary and, indeed, fully sculptural ornamental gilded mantlings, detail as flamboyant but infinitely more stylish than of the [Weld] boathouse. This mantling surmounts the entrance piers at both ends of the bridge and was once partnered by gilded street lamps, which ought to be restored.... The mantling was modeled by no less than Johannes Kirchmayer, one of the leading American architectural sculptors of the period. Its richness is perhaps explained by the design concept of the structure: 'May this bridge,' declares a bronze plaque on the Cambridge side, 'connecting the College Yard and playing fields of Harvard, be an ever present reminder to students passing over it of loyalty to country and Alma Mater.'

The bridge stands next to the Weld Boathouse and was designed with "a high enough arch to admit the passage of all sorts of pleasure craft." It may be noted that both the bridge and the boathouse (built in 1906) were funded by heirs to the fortune of 19th century magnate William Fletcher Weld.

All content from Kiddle encyclopedia articles (including the article images and facts) can be freely used under Attribution-ShareAlike license, unless stated otherwise. Cite this article:
Anderson Memorial Bridge Facts for Kids. Kiddle Encyclopedia.