Mystic Valley Parkway is a parkway in Arlington, Medford, Somerville, and Winchester, Massachusetts. It is listed on the National Register of Historic Places, and forms part of Route 16. 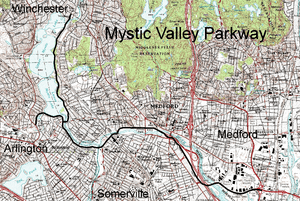 The parkway runs roughly north-south from the Middlesex Fells in Winchester, down the Aberjona River valley, and along the east side of the Mystic Lakes into Medford. This section follows the path of the old Middlesex Canal. It then crosses the Mystic River into Arlington (sharing a bridge with Massachusetts Route 60), and curves to follow the river as it runs east–west through Arlington. A short branch also runs along the southern shore of the Lower Mystic Lake from Route 60 where it ends at a junction with U.S. Route 3 and Massachusetts Route 2A. It meets Alewife Brook Parkway (and joins with Massachusetts Route 16) at a rotary near where Alewife Brook empties into the Mystic, and then continues to generally follow the course of the Mystic River downstream, crossing it several times before ending at Revere Beach Parkway where both meet Massachusetts Route 28.

The parkway, with surrounding landscape, forms part of Boston's Metropolitan Park District, established in 1893. The parkway itself was designed in 1894-1895 by the Olmsted Brothers, the noted landscape architects, with Charles Eliot taking a lead role. It was originally created as one section of a web of pleasure roads designed for their aesthetics, as part of a comprehensive plan for green spaces in and around Boston.

Lantern slides in the Library of Congress collection, Courtesy of the Frances Loeb Library, Graduate School of Design, Harvard University, offer views of the Parkways in published in 1895.

It now forms part of the Metropolitan Park System of Greater Boston, and on January 18, 2006, was added to the National Register of Historic Places as a historic district.

The Olmsted plan of the original parkway, 1895.

The entire route is in Middlesex County.

All content from Kiddle encyclopedia articles (including the article images and facts) can be freely used under Attribution-ShareAlike license, unless stated otherwise. Cite this article:
Mystic Valley Parkway Facts for Kids. Kiddle Encyclopedia.