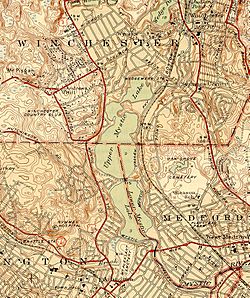 The Upper and Lower Mystic Lakes.

The Mystic Lakes, consisting of Upper Mystic Lake and Lower Mystic Lake, are closely linked bodies of water in the northwestern suburbs of Boston, Massachusetts.

The lakes lie at an elevation of 1 meter above sea level, within the towns of Winchester, Arlington, and Medford, Massachusetts. Upper Mystic Lake is fed by the Aberjona River, and drains south, over the Mystic Dam, into Lower Mystic Lake, which in turn empties into the Mystic River and then Boston Harbor.

Lower Mystic Lake is a meromictic lake, which means that the lake has a deep layer of water that rarely, if ever, mixes with its top waters. As a consequence, the sediments at the bottom of Lower Mystic Lake accumulate in annual layers (or varves) that have been nearly undisturbed for a thousand years. Such varves in meromictic lakes preserve an historical record somewhat like tree rings do. In the case of Lower Mystic Lake, the varves have been used by Mark Besonen and his collaborators to study the historical incidence of hurricanes.

Although the Mystic Lakes are popular for swimming, sailing, and fishing, the Upper Mystic Lake suffers from contamination by arsenic and other heavy metals from the Aberjona River.

The eastern shore of the lakes is part of the Mystic River Reservation managed by the Massachusetts Department of Conservation and Recreation.

The lakes were previously part of the drinking water supply for Charlestown and later Boston (see Massachusetts Water Resources Authority).

In the 1600s, the Squaw Sachem of Mistick, who deeded much of the land in Greater Boston to settlers, resided near the Mystics Lakes.

All content from Kiddle encyclopedia articles (including the article images and facts) can be freely used under Attribution-ShareAlike license, unless stated otherwise. Cite this article:
Mystic Lakes (Boston) Facts for Kids. Kiddle Encyclopedia.