Ware is a town in Hampshire County, Massachusetts, United States. The population was 10,066 as of 2020. It is part of the Springfield, Massachusetts Metropolitan Statistical Area.

The census-designated place of Ware, comprising the main settlement of the town, is in the southeastern corner of the town. The area's students are served by Ware Junior Senior High School.

Ware was first settled on Equivalent Lands in 1717 and was officially incorporated in 1775. It is named after the English town of Ware, Hertfordshire.

In 1716 a tract of land which was a little more than 11,000 acres (45 km²) in size was granted to John Read. He named it "The Manour Of Peace" and had it in mind to develop it in the style of an English manor anticipating that it would later become a very valuable country estate. He leased out the land and did not sell 1-acre (4,000 m2) until after his death when he gave a gift of 200 acres (0.81 km2) to serve as a ministry lot. As time passed, the town of Ware grew up around the old Congregational meeting house and later became a small center of local manufacturing and commerce.

The actual origin of the name, Ware, is thought to be derived from a translation of the Native American word "Nenameseck," meaning fishing weir (pronounced Ware). The weirs were used to capture salmon that were once abundant in New England waterways.

In 1729, the first grist and saw mills were built on the banks of the Weir River by Jabez Olmstead. During the American Revolution there were at least eight taverns and several inns in the area. Two of the most famous were Ebenezer Nye’s tavern and John Downing’s. After town meetings were held they would often adjourn to the latter establishment. By the 1830s it was not uncommon to see textile mills dotted along the various local rivers. At this point Ware community was making the transition from an agrarian economy to an industrially based society. The post Civil War era (1850s - 1900s) brought a new prosperity to the now established textile mill town. "Ware factory village," as it was known, sprung up overnight and formed the basis for new growth and development.

For nearly 100 years the Otis company had been the largest single Ware employer. Cotton had been the primary product and by 1937, denims, awnings and tickings were the principal output. It had been very prosperous until World War I when its employees numbered close to 2,500. By the 1920s however, the company began to decline due to southern competition and lack of modern machinery.

By the mid thirties, the Directors decided to liquidate although no public announcement was made. Shortly thereafter, the company had sold its interests to 3 "cotton men" – Lawrence W. Robert Jr., Edward J. Heitzeberg, and Paul A. Redmond – all with close connections to Alabama Mills which owned factories in the South.

Instantly, the townspeople rallied to the cause. A public mass meeting was called that evening and plans to raise the necessary cash in order to forestall what appeared to be the imminent ruin of the town were formulated. The citizens of Ware were able to purchase the mills together with the backing of the Ware Trust Company. The mills became Ware Industries Inc., and Ware came to be known nationwide as "The Town That Can’t Be Licked."

The town gained lands in the late 1930s as part of the building of the Quabbin Reservoir. The reservoir dammed the Swift River in the former town of Enfield, flooding the valley. Four towns - Enfield, Greenwich, Prescott and Dana - were disincorporated in 1938 by this building of the reservoir. Much of Enfield and Greenwich became part of the town of Ware, extending the town's lands northward. Today, the town is home to most of the Windsor Dam and its spillway, and the Goodnough Dike, both of which lie within the Quabbin Reservation. Ware's portion of this land is some of the most accessible land in the reservation, with a large lookout tower atop Quabbin Hill. Ware also bears the morbid distinction of being host to the Quabbin Park Cemetery, where most of the graves in the former towns were relocated to, as well as most of the town monuments. 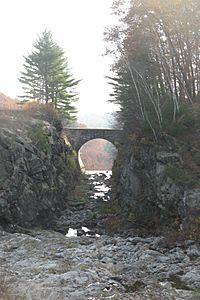 According to the United States Census Bureau, the town has a total area of 40.0 square miles (103.5 km2), of which 34.4 square miles (89.0 km2) are land and 5.6 square miles (14.5 km2), or 14.01%, are water. Ware lies at the southern end of the Quabbin Reservoir and the Quabbin Reservation. The reservation lands within town include two islands, the former Little Quabbin Hill and Mount Lizzie, neither of which were covered by the waters of the reservoir. The Swift River forms the western boundary of the town, and the Ware River flows through the southeastern part of the town, meeting in Palmer to form the Chicopee River (along with the Quaboag River), which flows into the Connecticut River. The lands of Ware are hilly between the valleys of the Swift and Ware rivers, and much of the land not surrounding the central part of town is heavily forested, with marshes lining the Ware River in spots. Along the Swift River lies the Herman Covey–Swift River Wildlife Management Area.

Ware is the easternmost town in Hampshire County, and is bordered by Franklin County to the north, Worcester County to the east, and Hampden County to the south. The town is bordered by New Salem to the northwest, Petersham to the north, Hardwick to the northeast, New Braintree and West Brookfield to the east, a small portion of Warren to the southeast, Palmer to the south, and Belchertown to the west. (There is no land link between New Salem or Petersham and Ware due to the Quabbin Reservoir.) Downtown Ware lies 24 miles (39 km) east-southeast of the county seat of Northampton, 26 miles (42 km) northeast of Springfield, 30 miles (48 km) west of Worcester, and 72 miles (116 km) west of Boston.

Ware has no interstates or limited-access highways, the town center being 8.5 miles (13.7 km) north of Exit 8 (the Palmer exit) of Interstate 90. The town is linked to Route 9, the major east-west route through central Massachusetts, by Route 32, which runs concurrently with Route 9 from their merging point to just west of the West Brookfield town line, where Route 32 crosses through the eastern edge of Ware as it heads north. Route 9 heads west through town, passing along the edge of the Quabbin Reservation on its way towards Belchertown. The town has no public transit systems, but does have a commercial rail line, the Massachusetts Central Railroad, which follows the former Ware River Railroad line along the Ware River from Barre to where the line meets the Boston and Albany Railroad lines in Palmer. There is a private general aviation airstrip along Route 32 in the eastern part of town. The nearest national air service airports are Bradley International Airport in Connecticut and Worcester Regional Airport in Massachusetts.

All content from Kiddle encyclopedia articles (including the article images and facts) can be freely used under Attribution-ShareAlike license, unless stated otherwise. Cite this article:
Ware, Massachusetts Facts for Kids. Kiddle Encyclopedia.