Greenwich (pronounced "gren-itch") was a town in Hampshire County, Massachusetts. The town was lost as a result of the formation of the Quabbin Reservoir. 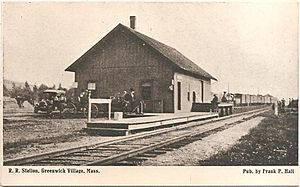 Greenwich was established in 1739 as Quabbin, incorporated as Quabbin Parish in 1754, and became the town of Greenwich (named for John Campbell, Duke of Greenwich) in 1754. It was located along the East and Middle branches of the Swift River. The Athol Branch of the Boston and Albany Railroad ran through the center of town, as did Route 21. It was well known for its lakes and ponds, which were popular vacation spots. It bordered four towns—Enfield, Prescott, Dana, and Hardwick.

Greenwich was disincorporated on April 28, 1938, as part of the creation of the Quabbin Reservoir. Upon disincorporation, portions of the town were annexed to the adjacent towns of Hardwick, New Salem, Petersham, and Ware. (Because of the redrawing of town lines, the land is no longer completely in Hampshire County; only the portion located in Ware is.) Because most of Greenwich was at lower elevation than the surrounding towns, it is now largely submerged, except for the hilltops of Curtis Hill, Mount Lizzie and Mount Pomeroy, which are now islands.

Greenwich House, an on-campus living facility at Hampshire College in Amherst, Massachusetts, is named after the former town.

All content from Kiddle encyclopedia articles (including the article images and facts) can be freely used under Attribution-ShareAlike license, unless stated otherwise. Cite this article:
Greenwich, Massachusetts Facts for Kids. Kiddle Encyclopedia.