Amherst is a town in Hampshire County, Massachusetts, United States in the Connecticut River valley. As of the 2010 census, the population was 37,819, making it the largest community in Hampshire County (although the county seat is Northampton). The town is home to Amherst College, Hampshire College, and the University of Massachusetts Amherst, three of the Five Colleges. The name of the town is pronounced without the h ("AM-erst"), giving rise to the local saying, "only the 'h' is silent", in reference both to the pronunciation and to the town's politically active populace.

The communities of Amherst Center, North Amherst, and South Amherst are census-designated places.

The earliest known document of the lands now comprising Amherst is the deed of purchase dated December 1658 between John Pynchon of Springfield and three native inhabitants, referred to as Umpanchla, Quonquont, and Chickwalopp. According to the deed, "ye Indians of Nolwotogg (Norwottuck) upon ye River of Quinecticott (Connecticut)" sold the entire area in exchange for "two Hundred fatham of Wampam & Twenty fatham, and one large Coate at Eight fatham wch Chickwollop set of, of trusts, besides severall small giftes" [sic]. Amherst celebrated its 250th anniversary in 2009. The Amherst 250th Anniversary Celebration Committee was established to oversee the creation and implementation of townwide activities throughout 2009. The Amherst Historical Society also organized events, including a book published by them and written by Elizabeth M. Sharpe, Amherst A to Z.

Amherst was first visited by Europeans as early as 1665 when Nathaniel Dickinson (the great great grandfather of poet, Emily Dickinson) surveyed the lands for its mothertown Hadley. The first permanent English settlements arrived in 1727. It gained precinct status in 1734 and eventually township in 1759.

When it incorporated, the colonial governor assigned the town the name Amherst after Jeffery Amherst, 1st Baron Amherst. Many colonial governors at the time scattered his name amidst the influx of new town applications, which is why several towns in the Northeast bear the name. Amherst was a hero of the French and Indian War who, according to popular legend, singlehandedly won Canada for the British and banished France from North America. Popular belief has it that he supported the American side in the Revolutionary war and resigned his commission rather than fight for the British. Baron Amherst actually remained in the service of the Crown during the war—albeit in Great Britain rather than North America—where he organized the defense against the proposed Franco-Spanish Armada of 1779. Nonetheless, his previous service in the French and Indian War meant he remained popular in New England. Amherst is also infamous for recommending, in a letter to a subordinate, the use of smallpox-covered blankets in warfare against the Native Americans along with any "other method that can serve to Extirpate this Execrable Race". For this reason, there have been occasional ad hoc movements to rename the town. Suggested new names have included "Emily", after Emily Dickinson.

According to the United States Census Bureau, Amherst has a total area of 27.8 square miles (72.0 km2), of which 27.7 square miles (71.7 km2) is land and 0.04 square miles (0.1 km2) (0.14%) is water. The town is bordered by Hadley to the west, Sunderland and Leverett to the north, Shutesbury, Pelham, and Belchertown to the east, and Granby and South Hadley to the south. The highest point in the town is on the northern shoulder of Mount Norwottuck; the peak is in Granby but the town's high point is a few yards away and is about 1100 feet. The town is nearly equidistant from both the northern and southern state lines. For interactive mapping provided by the Town of Amherst, see [[ Amherst's ZIP code of 01002 is the second-lowest number in the continental United States after Agawam (not counting codes used for specific government buildings such as the IRS).

Amherst has a humid continental climate that under the Köppen system marginally falls into the warm-summer category (dfb). It is interchangeable with the hot-summer subtype dfa with July means hovering around 71.4 °F (21.9 °C). Winters are cold and snowy, albeit daytime temperatures often remain above freezing. 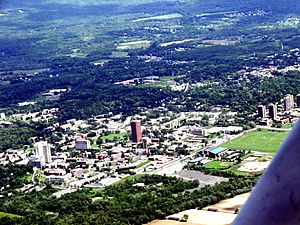 There were 9,174 households out of which 27.0% had children under the age of 18 living with them, 36.4% were married couples living together, 10.8% had a female householder with no husband present, and 50.4% were non-families. Of all households 28.6% were made up of individuals and 8.6% had someone living alone who was 65 years of age or older. The average household size was 2.45 and the average family size was 2.97.

Of residents 25 years old or older, 41.7% have a graduate or professional degree, and only 4.9% did not graduate from high school. The largest industry is education, health, and social services, in which 51.9% of employed persons work.

These statistics given above include some but not all of the large student population, roughly 30,000 in 2010, many of whom only reside in the town part of the year. Amherst is home to thousands of part-time and full-time residents associated with the University of Massachusetts Amherst, Amherst College, and Hampshire College and many of those students are involved with the liberal politics of the town.

The Pioneer Valley Transit Authority, funded by local governments and the Five College Consortium, provides public transportation in the area, operated by University of Massachusetts Transportation Services. Service runs well into the early morning hours on weekends when school is in session. Students attending any colleges in the Five Colleges Consortium have a fee included in their tuition bills (service fee for UMass Amherst students and student activity fees for the other colleges) for each semester that prepays their bus fares for the semester. UMass Transit buses operate via a proof-of-payment system, in which there are random checks of student identification cards and bus passes and transfers.

Amtrak rail service is available in nearby Northampton on the Vermonter service between Washington D.C. and St. Albans, Vermont. More frequent Amtrak service to New York City and Washington, D.C. is available from Union Station in Springfield.

All content from Kiddle encyclopedia articles (including the article images and facts) can be freely used under Attribution-ShareAlike license, unless stated otherwise. Cite this article:
Amherst, Massachusetts Facts for Kids. Kiddle Encyclopedia.