Sunderland is a town in Franklin County, Massachusetts, United States, part of the Pioneer Valley. The population was 3,663 at the 2020 census. It is part of the Springfield, Massachusetts Metropolitan Statistical Area.

Sunderland was first settled in 1713 and was officially incorporated in 1718. It was first known as Swampfield, a name which is now honored by Swampfield Road, but the name was changed to attract more residents. It was renamed in honor of Charles Spencer, the Earl of Sunderland. Historically, the land was largely used for farming. Before the incorporation of Leverett in 1774, that town was a part of Sunderland's territory. 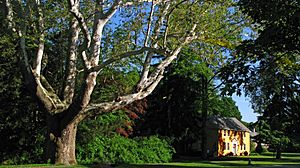 The Buttonball Tree is an American sycamore located on N Main St. in Sunderland

According to the United States Census Bureau, the town has a total area of 14.7 square miles (38.2 km2), of which 14.2 square miles (36.9 km2) is land and 0.50 square miles (1.3 km2), or 3.53%, is water. Sunderland is located in the Pioneer Valley on the east bank of the Connecticut River, which drains the town. Mount Toby, a prominent conglomerate mountain with a firetower lookout, stands at the east border of the town and is traversed by the 47-mile (76 km) Robert Frost Trail. The mountain, surrounded by Mount Toby State Forest, is known for its waterfalls, scenic vista, and biologically diverse ecosystem. Sunderland is home to the Buttonball Tree, an American sycamore famous for its size and age.

Sunderland lies on the southern edge of Franklin County, north of Hampshire County. Sunderland is bordered by Montague to the north, Leverett to the east, Amherst and Hadley to the south, and Whately and Deerfield to the west. (Because of the river, there is no direct access between Sunderland and Whately.) From its town center just east of the Connecticut River, Sunderland is 10 miles (16 km) south of the county seat of Greenfield, 28 miles (45 km) north of Springfield, and 90 miles (140 km) west of Boston. Most of the town's population lies in the western part of town, along the river, though there is a small village north of Mount Toby.

There is no interstate within town, with the nearest being Interstate 91 to the west of the town. Route 116 passes through the town, coming from Amherst and passing into Deerfield along the Sunderland Bridge. The bridge is the only road crossing of the Connecticut River between the General Pierce Bridge between Greenfield and Montague to the north, and the Calvin Coolidge Bridge between Hadley and Northampton to the south, a distance of 19 miles (31 km). Route 47 also passes through the western part of town, crossing Route 116 and heading north before terminating at Route 63 in Montague. Route 63 passes through the town for a short distance in the northeast corner of town. Alongside Route 63, the New England Central Railroad passes through the town, carrying the Amtrak Vermonter line through town towards Vermont. There is, however, no stop for the train within the town. The town is served by a route of the Franklin Regional Transit Authority (FRTA) bus line, between Amherst and Greenfield, and a route of the Pioneer Valley Transit Authority (PVTA) bus line, between Amherst and South Deerfield. The nearest general aviation airport is the Turners Falls Airport in Montague, with the nearest national air service being at Bradley International Airport in Connecticut. 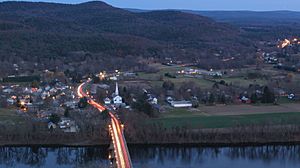 The town makes use of an Agricultural Preservation Restriction Program. The development rights to farmland are bought up for 80% of the assessed value of the land. This allows farming to continue on the land but prevents residential and commercial development of the land. Such actions, though, have resulted in negative economic consequences and this is something that economists are becoming increasingly concerned about. According to the Office of Federal Housing Enterprise Oversight, between 1980 and 2003, the nation's largest overall percentage increase in housing prices occurred in Massachusetts. The cost of rental housing has grown similarly. A recent study by the National Low Income Housing Coalition rated Massachusetts as being the least affordable state in which to rent an apartment in 2003. The town, however, has a significant number of rental housing units that are home to many students from the neighboring colleges. These rental units are affordable to low and moderate income residents, but are not qualified as "affordable" under Chapter 40B, the state's stringent affordable housing law which requires deed restrictions to assure affordability in perpetuity. Sunderland has more rental units per capita than nearly every other municipality in the Commonwealth of Massachusetts, and the market rates of these units are lower than the vast majority of unit rates proposed in the proposed Sugarbush Meadows rental complex.

According to the 2007 Annual Report, upwards of forty programs and events were made available to the residents of Sunderland through the support of the Recreation Department. Events and programs include craft lessons, UMass ice hockey and football events, adult and youth sports, an annual Easter Egg Hunt, hikes, dance lessons, and many other activities in Sunderland and the surrounding areas. The town holds annual fall festivals in mid-October and a Memorial Day parade and ceremony. The Mount Toby state reservation is on the northern edge of Sunderland, hosting a large trail network that is open to hiking, mountain biking, skiing, snowmobiling, and hunting. The Sunderland Boat Ramp on the Connecticut River allows for swimming, fishing, and boating.

Sunderland is a member of the Frontier Regional and Union 38 School Districts, which also includes Conway, Whately and Deerfield. Each town operates its own elementary school, with Sunderland Elementary School serving the town's students from preschool through sixth grades. All four towns send seventh through twelfth grade students to Frontier Regional School in Deerfield. Frontier's athletics teams are nicknamed the Redhawks, and the team colors are red and blue. There are many art programs available during and after school at Frontier. There are several private schools in the area, including the Bement School (a coeducational boarding school serving students from kindergarten through ninth grades), the Eaglebrook School (a private boys' school for grades 6–9), and the Deerfield Academy, a private prep school.

All content from Kiddle encyclopedia articles (including the article images and facts) can be freely used under Attribution-ShareAlike license, unless stated otherwise. Cite this article:
Sunderland, Massachusetts Facts for Kids. Kiddle Encyclopedia.