Leverett is a town in Franklin County, Massachusetts, United States. The population was 1,865 as of the 2020 census. It is part of the Springfield, Massachusetts Metropolitan Statistical Area.

According to the Massachusetts FCCC, Leverett was first settled in the 17th century when pioneers developed the Swampfield Plantation. The first permanent settlement, however, was not established until 1750, and the settlers officially petitioned Sunderland to become their own town in 1774. The town was named for John Leverett, the twentieth governor of the Massachusetts Bay Colony.

In 1985, a Buddhist monastic order called Nipponzan Myohoji erected a large monument in Leverett. This structure, known as the New England Peace Pagoda, is considered the first of its kind in North America. Two historic Evangelical churches are also located in Leverett, North Leverett Baptist and Moores Corner Church which was founded by a protégé of Evangelist D.L. Moody. 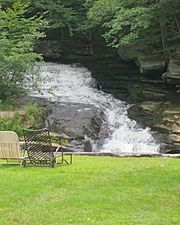 According to the United States Census Bureau, the town has a total area of 23.0 square miles (60 km2), of which 22.9 square miles (59 km2) are land and 0.1-square-mile (0.26 km2) (0.61%) is water. Leverett is located on the edge of the Pioneer Valley and the hills of northwestern Massachusetts, just east of the Connecticut River. The southwestern corner of town is relatively flat plains, while the rest is dominated by hills, the tallest of which is Brushy Mountain, with an elevation of 1,260 feet (380 m).

Several brooks drain through the town, all heading toward the Connecticut River. Leverett Pond is the town's largest body of water, lying near the center of town. A small part of Mount Toby State Forest crosses into the town from the west. The town's most famous geological feature, however, is Rattlesnake Gutter, a boulder-filled chasm near the geographic center of town.

Leverett is located along the southern border of Franklin County, north of Hampshire County. The town is bordered by Montague to the north, Wendell to the northeast, Shutesbury to the east, Amherst to the south, and Sunderland to the west. There are four small villages in the town, Leverett Center, East Leverett, North Leverett and Moores Corner. North Leverett begins at the intersection of Montague Road and Cave Hill Road, extending north to the Montague and Wendell borders. From Leverett Center, Leverett is 14 miles (23 km) south-southeast of the county seat of Greenfield, 27 miles (43 km) north of Springfield, and 86 miles (138 km) west of Boston.

There are no interstates or limited-access highways in the town; the nearest, Interstate 91, lies west of town, across the Connecticut River. The only state route to pass through town, Route 63, runs through the western side of town, heading from Amherst into Montague. The route is closely mirrored by the New England Central Railroad freight line. The nearest general aviation airport is Turners Falls Airport in Montague, and the nearest national air service is at Bradley International Airport in Connecticut.

All content from Kiddle encyclopedia articles (including the article images and facts) can be freely used under Attribution-ShareAlike license, unless stated otherwise. Cite this article:
Leverett, Massachusetts Facts for Kids. Kiddle Encyclopedia.