Pelham is a town in Hampshire County, Massachusetts, United States. The population was 1,280 at the 2020 census. Its ZIP Code is shared with Amherst.

Pelham is part of the Springfield, Massachusetts Metropolitan Statistical Area. 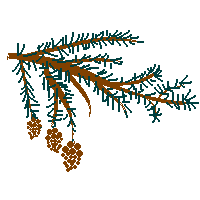 A drawing of the town flag of Pelham.

Pelham (pronounced "PEL-am"; the "h" is silent) was part of the Equivalent Lands compromise, and was first settled in 1738 by mostly Presbyterian Scotch-Irish immigrants. It was officially incorporated in 1743. The town is named for the Pelham family; Henry Pelham was Prime Minister of the United Kingdom at the time of the town's incorporation, and his father, Thomas Pelham, 1st Baron Pelham had been prime minister prior to his term. The town is best known as being home to Daniel Shays, leader of Shays' Rebellion, a series of non-violent protests against crushing austerity measures in Massachusetts during 1786 and 1787. The rebellion, planned in Conkey's Tavern in town, drew support from many towns in central and western Massachusetts, but it met its practical end when the angry farmers' force refused to fight Governor Bowdoin's army and they were dispersed in a rout in nearby Petersham. Pelham also holds the distinction of having the oldest town hall in continuous use in the United States. A town meeting is held there for that primary purpose each year.

Pelham's boundaries have changed twice in its history. Originally a much larger town, rectangular in shape (except for a small extension southward taking up part of the modern area of Knight's Corner) and extending eastward to the top of Prescott Hill (where Daniel Shays once lived), the land east of the West Branch of the Swift River was annexed by the town of Prescott in the latter half of the nineteenth centuries (maps made in 1855 and 1862 both show this land still belonging to Pelham). The landscape would change once again, however, when the Quabbin Reservoir was formed along the branches of the Swift River. The reservoir filled along the river, and protected lands along its edge became part of the Quabbin Reservation. It was at this time as well that the towns of the valley were dis-incorporated, and a portion of Enfield which now constitutes the town's southeast corner (roughly east of Caldwell Brook and Knight's Corner) was given to the town. Because the reservoir divided the town from its old lands in Prescott, however, that portion of land was not returned to the town, but given to New Salem instead. 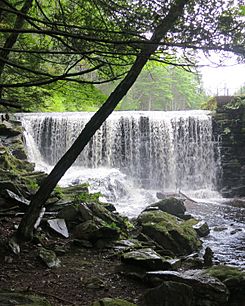 Buffam Falls Conservation Areas is located along the Metacomet-Monadnock Trail

According to the United States Census Bureau, the town has a total area of 26.5 square miles (69 km2), of which 25.1 square miles (65 km2) is land and 1.4 square miles (3.6 km2) (5.40%) is water. The town lies along the western edge of the Quabbin Reservoir, its town line following the former path of the West Branch of the Swift River, which once flowed through the town. The town lies along the hills which divide the Pioneer Valley along the Connecticut River to the west from the Quabbin Valley to the east. The brooks in town also flow in both these directions; those in the eastern third of town drain towards the Quabbin, with the western brooks draining towards the Connecticut. The town is fairly forested, some of which are protected; these include Cadwell Memorial Forest, Buffam Falls Conservation Area and the Quabbin lands.

Pelham is the northeastern-most town in Hampshire County, bordering Franklin County to the north and east. (Prior to the formation of the Quabbin Reservoir, the town of Prescott was the northeast corner of the county, but its lands were absorbed by New Salem.) Pelham is bordered by Shutesbury to the north, New Salem to the east, Belchertown to the south and Amherst to the west. (Because of the reservoir, there is no direct connection between Pelham and New Salem.) The historical center of town is located 14 miles (23 km) east of the county seat of Northampton, 25 miles (40 km) north-northeast of Springfield, 45 miles (72 km) northwest of Worcester, and 84 miles (135 km) west of Boston (though the latter two distances are hampered by not having direct routes across the Quabbin).

U.S. Route 202, which was rerouted due to the Quabbin Reservoir project along the Daniel Shays Highway, runs through the eastern side of town. Other than a small portion of Route 9 which clips the town's southwest corner, Route 202 is the only highway through town. The town is roughly equidistant from Interstate 90, Interstate 91 and Route 2 to the south, west, and north, respectively.

The nearest rail service is the Amtrak Vermonter service in Northampton. Several general aviation airports are located in nearby towns, but the nearest national air service can be reached at Bradley International Airport in Connecticut.

There were 545 households, out of which 32.5% had children under the age of 18 living with them, 58.2% were married couples living together, 8.6% had a female householder with no husband present, and 29.9% were non-families. Of all households, 19.8% were made up of individuals, and 6.2% had someone living alone who was 65 years of age or older. The average household size was 2.57 and the average family size was 2.95.

All content from Kiddle encyclopedia articles (including the article images and facts) can be freely used under Attribution-ShareAlike license, unless stated otherwise. Cite this article:
Pelham, Massachusetts Facts for Kids. Kiddle Encyclopedia.