Kids Encyclopedia Facts
This page is about the mountain in Pelham, Massachusetts. For other mountains with the same name, see Mount Lincoln.

Mount Lincoln, 1,240 feet (380 m), is a high point on the Pelham Dome or Pelham Hills, an upland plateau overlooking the Connecticut River Valley in Pelham, Massachusetts (near Amherst, Massachusetts). The mountain is mostly wooded, but a fire tower located on the summit provides views of the Holyoke Range and the east-central Pioneer Valley. The summit, located within the University of Massachusetts Amherst's 1,200-acre (490 ha) Cadwell Memorial Forest, is traversed by the Metacomet-Monadnock Trail and is the home of the Five Colleges radio station beacon. 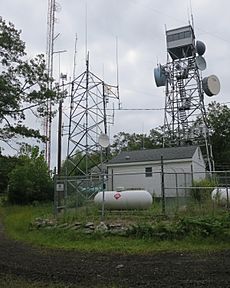 Amongst this jumble of electronic transmitters, the original 80 foot fire tower remains in seasonal use.

The forest is named after Frank A. Cadwell (1860–1935), a successful local businessman orphaned at age sixteen following a logging accident that killed his father. Cadwell began his business career as an apprentice at the Amherst Ice Company and quickly rose to prominence as a land speculator and banker. Cadwell's widow donated the land to the University of Massachusetts Department of Forestry in 1952 to divest herself of having to pay taxes on the property. The University currently uses the forest to conduct silvaculture and ecosystem research.

The Metacomet-Monadnock Trail traverses over the summit of Mt. Lincoln. Because this section, #11, of the M&M Trail is not entirely on public land, re-routing of the trail because of private ownership issues remains a concern.

All content from Kiddle encyclopedia articles (including the article images and facts) can be freely used under Attribution-ShareAlike license, unless stated otherwise. Cite this article:
Mount Lincoln (Massachusetts) Facts for Kids. Kiddle Encyclopedia.