Belchertown (previously known as Cold Spring and Belcher's Town) is a town in Hampshire County, Massachusetts, United States. It is part of the Springfield, Massachusetts Metropolitan Statistical Area. The population was 14,649 at the 2010 census. The town includes the census-designated place of Belchertown. Belchertown was formerly the home of the Belchertown State School. The land on which the school sat is, as of 2016, being redeveloped for mixed uses including residential, commercial and recreational. This includes the 385-acre Lampson Brook Farm, used for community and sustainable agriculture, outdoor recreation, and wildlife preservation.

Belchertown was first settled in 1731 and was officially incorporated in 1761 as Cold Spring, later the name was changed to Belcher's Town, and then Belchertown.

In 1816, part of Belchertown was combined with part of the town of Greenwich, Massachusetts, to form Enfield, Massachusetts. In 1938, Enfield and Greenwich were two of the four towns that were disincorporated to make way for the Quabbin Reservoir, and the northwest part of Enfield was merged back into Belchertown.

The Belchertown State School for mentally disabled residents was located in the town for 70 years, from 1922 until its closing in 1994 amid revelations of poor conditions and inhumane treatment of its residents. The property has since been under consideration for redevelopment housing, business and agricultural use.

The University of Massachusetts in neighboring Amherst employs more Belchertown residents than any other enterprise or institution.

According to the United States Census Bureau, the town has a total area of 55.4 square miles (143.4 km²), of which 52.7 square miles (136.6 km²) is land and 2.6 square miles (6.8 km²) (4.77%) is water. Belchertown lies along the western banks of the western branch of the Quabbin Reservoir, with the lands around that water being part of the Quabbin Reservation. The town is hilly north of the town center, the hills forming part of the former Swift River Valley, with most of the rest of the town being relatively slowly sloping plains, spotted with plenty of meadow lands. Along the Swift River, which forms the eastern border of the town, lies the Herman Covey - Swift River Wildlife Management Area. Several other brooks and ponds dot the town's landscape, with some marshy lands lying along the Broad Brook.

Belchertown lies partially along the Franklin County line to the northeast, and along the Hampden County line to the south. It is bordered by Pelham to the north, New Salem to the northeast, Ware to the east, Palmer to the southeast, Ludlow to the southwest, and Granby and Amherst to the west. The town does not share a land border with New Salem, but borders the town's territory on the Quabbin Reservoir. The town's center lies 14 miles (23 km) east-southeast of the county seat of Northampton, 18 miles (29 km) miles northeast of Springfield, 37 miles (60 km) west of Worcester and 77 miles (124 km) west of Boston. Most of the population is centered around the town center, with most of the town being rural-residential, especially around the smaller ponds near the villages of Dwight and North Station.

The nearest interstate to the town, Interstate 90, runs just south of the town, with exits in Ludlow and Palmer. The exit in Ludlow can be reached along Route 21, which terminates at U.S. Route 202 west of the town common. (Prior to the building of the Quabbin Reservoir, Route 21 extended north along North Enfield Road towards the town of Athol.) The Palmer exit can be accessed along Route 181, which links U.S. Route 20 in Palmer and Route 202 in Belchertown, where the latter turns northwards towards Pelham along the edge of the reservoir. The town is also crossed by Route 9, the major east-west route through central Massachusetts, which heads from Ware towards Amherst, passing just north of the town center. Interstate 91 runs can be reached on Route 9 about nine miles from the Belchertown/Pelham line.

The New England Central Railroad and an abandoned line which once linked to the Massachusetts Central Railroad in Palmer pass through the town. The NECR carries freight on the line, though north of Belchertown it becomes part of the Amtrak Vermonter service between Vermont and the rest of the northeast. There is a private airstrip, Metropolitan Airport, in Palmer, but the nearest national air service can be reached at Bradley International Airport in Connecticut.

There were 4,886 households out of which 38.8% had children under the age of 18 living with them, 59.2% were married couples living together, 9.8% had a female householder with no husband present, and 28.0% were non-families. 20.3% of all households were made up of individuals and 7.0% had someone living alone who was 65 years of age or older. The average household size was 2.65 and the average family size was 3.09. 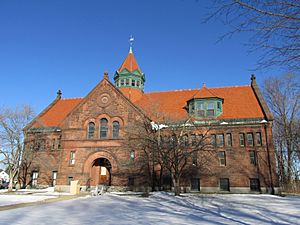 All content from Kiddle encyclopedia articles (including the article images and facts) can be freely used under Attribution-ShareAlike license, unless stated otherwise. Cite this article:
Belchertown, Massachusetts Facts for Kids. Kiddle Encyclopedia.