Granby is a town in Hampshire County, Massachusetts, United States. The population was 6,420 at the 2010 census. It is part of the Springfield, Massachusetts Metropolitan Statistical Area. The town partially overlaps with the census-designated place of Granby.

Granby was once part of Hadley as were other towns. Granby was first settled in 1727 and was officially incorporated in 1768. The town is named in honor of John Manners, Marquess of Granby, a hero of the Seven Years' War. Granby was originally part of Hadley equivalent lands, and then South Hadley, before being incorporated on June 11, 1768. Old Hadley was first settled in 1659 by people from Hartford and Wethersfield, Connecticut. These settlers left Connecticut because of religious differences within their communities. John Pynchon was commissioned to buy wilderness land for their new community. Pynchon purchased the land from three Native American chiefs: Chickwallop, Umpanchala and Quontquont. Ownership was transferred to the settlers and confirmed by the General Court. These original boundaries include part of present-day Granby.

Granby is one of only three towns in Massachusetts whose local telephone service is not furnished by the former Bell System (Granby has always had its own telephone company, the Granby Telephone Company). The other two such towns are Richmond and Hancock, both in Berkshire County. 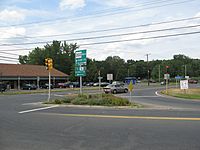 View of Five Corners in Granby

According to the United States Census Bureau, the town has a total area of 28.1 square miles (72.7 km²), of which 27.9 square miles (72.2 km²) is land and 0.2 square mile (0.5 km²) (0.71%) is water. Granby is bordered by South Hadley to the west, Amherst to the north, Belchertown to the east, and Ludlow and Chicopee to the south. Two highways pass through the town; U.S. Route 202 runs eastward though town from South Hadley to Belchertown on East State Street and West State Street. Route 116 runs northeastward from South Hadley to Amherst along Amherst Road.

The Holyoke Range is in the northern part of Granby. Major peaks within the town are Long Mountain and Mount Norwottuck. Norwottuck is the highest point in town at 1106 feet above sea level. The Metacomet-Monadnock Trail runs along this mountain range as it passes through Granby. The Horse Caves are geological ledges along this trail.

There were 2,247 households out of which 34.5% had children under the age of 18 living with them, 62.8% were married couples living together, 8.2% had a female householder with no husband present, and 26.0% were non-families. 20.1% of all households were made up of individuals and 7.9% had someone living alone who was 65 years of age or older. The average household size was 2.71 and the average family size was 3.15.

All content from Kiddle encyclopedia articles (including the article images and facts) can be freely used under Attribution-ShareAlike license, unless stated otherwise. Cite this article:
Granby, Massachusetts Facts for Kids. Kiddle Encyclopedia.