Wethersfield is a town in Hartford County, Connecticut, USA, immediately south of Hartford along the Connecticut River. Many records from colonial times spell the name "Weathersfield", while Native Americans called it "Pyquag". The town's motto is "Ye Most Auncient Towne in Connecticut", and its population was 26,668 in the 2010 census. The town is primarily served by Interstate 91. The neighborhood known as Old Wethersfield is the state's largest historic district, spanning two square miles and 1,100 buildings, dating back to the 17th, 18th and 19th centuries.

Founded in 1634 by a Puritan settlement party of "10 Men" including John Oldham, Robert Seeley, Thomas Topping and Nathaniel Foote, Wethersfield is arguably the oldest town in Connecticut, depending on one's interpretation of when a remote settlement qualifies as a "town". Along with Windsor and Hartford, Wethersfield is represented by one of the three grapevines on the Flag of Connecticut, signifying the state's three oldest European settlements. The town took its name from Wethersfield, a village in the English county of Essex.

During the Pequot War, on April 23, 1637, Wongunk chief Sequin attacked Wethersfield with Pequot help. They killed six men and three women, a number of cattle and horses, and took two young girls captive. They were daughters of Abraham Swain or William Swaine (sources vary) and were later ransomed by Dutch traders.

Four witch trials and three executions for witchcraft occurred in the town in the 17th century. Mary Johnson was convicted of witchcraft and executed in 1648, Joan and John Carrington in 1651. Landowner Katherine Harrison was convicted, and although her conviction was reversed, she was banished and her property seized by her neighbors.

Silas Deane, commissioner to France during the American Revolutionary War, lived in the town. His house is now part of the Webb-Deane-Stevens Museum. In May 1781, at the Webb House on Main Street, General George Washington and French Lt. Gen. Rochambeau planned the Siege of Yorktown, which culminated in the independence of the then rebellious colonies.

Wethersfield was "for a century at least, the centre of the onion trade in New England", during the late 1700s and early to middle 1800s. "Outsiders dubbed the Connecticut village 'Oniontown,' with a crosshatch of affection and derision, for this was home of the world-famous Wethersfield red onion."

In addition, the town was home to William G. Comstock, a well-known 19th century gardening expert and author of the era's most prominent gardening book, Order of Spring Work. In 1820, Comstock founded what would become Comstock, Ferre & Company, currently America's oldest continuously operating seed company, pioneering the commercial sale of sealed packets of seeds as he had learned from the Amish. Other nationally prominent seed companies in and around the town are the offspring of this agricultural past.

A meteorite fell on Wethersfield on November 8, 1982. It was the second meteorite to fall in the town in the span of 11 years, and crashed through the roof of a house without injuring the occupants, as the first Wethersfield meteorite had also done. The 1971 meteorite was sold to the Smithsonian, and the 1982 meteorite was taken up as part of a collection at the Yale Peabody Museum.

Wethersfield was once connected to Hartford by streetcar and by passenger service on the Valley Railroad. Its tracks still provide a route for sporadic freight trains between Hartford and Old Saybrook.

Three buildings in Wethersfield are designated as historic landmarks by the National Register of Historic Places:

In 1970, Old Wethersfield, the district bounded by Hartford, the railroad tracks, I-91 and Rocky Hill, was added to the National Register of Historic Places. This is the largest historic district in Connecticut, with two square miles containing 1,100 buildings, many dating back to the 18th and 19th centuries. 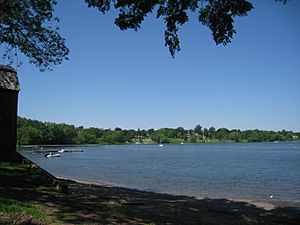 The historic First Church of Christ, Wethersfield, is the home of the Albert Schweitzer Organ Festival USA, a major national competition for young organists held annually since 1998.

Wethersfield was the setting for the children's novel The Witch of Blackbird Pond by Elizabeth George Speare, as well as the setting of the one-act play The Valiant by Holworthy Hall and Robert Middlemass.

Actor-turned-author Thomas Tryon used his native Wethersfield as the setting for his action/romance novels The Wings of the Morning and In the Fire of Spring, as well as a mystery/horror novel and film The Other.

The short film Disneyland Dream features the Barstow family from Wethersfield, including footage of their neighborhood.

The novel Parrot and Olivier in America by two-time Booker Prize-winning Australian author Peter Carey was largely set in the town of Wethersfield. The novel touches on some hallmarks of its history including the predominance of onion farming and the old state prison.

All content from Kiddle encyclopedia articles (including the article images and facts) can be freely used under Attribution-ShareAlike license, unless stated otherwise. Cite this article:
Wethersfield, Connecticut Facts for Kids. Kiddle Encyclopedia.