Whately ( WHAYT-lee) is a town in Franklin County, Massachusetts, United States. The population was 1,607 at the 2020 census. It is part of the Springfield, Massachusetts Metropolitan Statistical Area.

Whately was first settled in 1672 as a northern section of Hatfield. The town peaceably petitioned for separation from the town because of its relatively long distance from the rest of Hatfield, and was officially incorporated in 1771, named by Governor Thomas Hutchinson for Thomas Whately, a Member of Parliament whose letter to Hutchinson would later be involved in the controversy which brought on Hutchinson's dismissal. Whately was the site of the state's first gin distillery, as well as other small mills, including wool and furniture mills. The town also used the water in town for agricultural pursuits, including dairying and one of the few Sumatran tobacco fields outside of Indonesia. 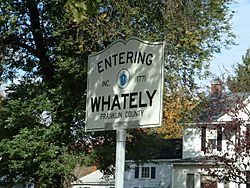 According to the United States Census Bureau, the town has a total area of 20.7 square miles (54 km2), of which 20.2 square miles (52 km2) is land and 0.5 square miles (1.3 km2), or 2.32%, is water. Whately lies along the southern border of the county, north of Hampshire County, and is bordered by Conway to the northwest, Deerfield to the northeast, Sunderland to the east, Hatfield to the south, and Williamsburg to the west. Whately is located 11 miles (18 km) south of Greenfield, 26 miles (42 km) north of Springfield, and 95 miles (153 km) west of Boston.

Whately lies along the western banks of the Connecticut River in the Pioneer Valley. The western part of town is hilly, with the highest point being the 980-foot (300 m) Mount Esther. East of the hills, the Mill River flows through town, with some swampland to the east between it and the Great Swamp Brook, a tributary which meets in the town. There is more marshy land in the southeast of town, closer to the Connecticut, and some small ponds between the two. Much of the land around the two rivers is cleared for farmland.

Whately is crossed by Interstate 91, which passes from north to south in the town, and is accessed at Exit 23 by U.S. Route 5 and the concurrently-running Massachusetts Route 10. The combined routes run roughly parallel to the interstate, crossing it twice in the town. In the north of town, a short, 200-yard stretch of Route 116 follows the same road as Routes 5 & 10 before another 400-yard stretch heads east back into the town of Deerfield, a result of the realignment of the route due to the building of the interstate. Whately shared the Pilgrim Airport, a small, general aviation airport, with neighboring Hatfield, but the field was closed and is currently used as farmland. The nearest general aviation airport is Northampton Airport, with the nearest national air service being at Bradley International Airport in Windsor Locks, Connecticut.

There were 629 households, out of which 29.6% had children under the age of 18 living with them, 55.6% were married couples living together, 7.2% had a female householder with no husband present, and 32.4% were non-families. Of all households 23.5% were made up of individuals, and 8.6% had someone living alone who was 65 years of age or older. The average household size was 2.48 and the average family size was 2.96.

Whately is a member of Frontier Regional and Union 38 School Districts, which also includes Conway, Deerfield and Sunderland. Each town operates its own elementary school, with Whately Elementary School serving the town's students from Pre-K through sixth grades. All four towns send seventh through twelfth grade students to Frontier Regional High School in Deerfield. There are several private schools in neighboring Deerfield, with more in the Greenfield and Northampton areas.

All content from Kiddle encyclopedia articles (including the article images and facts) can be freely used under Attribution-ShareAlike license, unless stated otherwise. Cite this article:
Whately, Massachusetts Facts for Kids. Kiddle Encyclopedia.