Hatfield is a town in Hampshire County, Massachusetts, United States. The population was 3,249 at the 2000 census. It is part of the Springfield, Massachusetts Metropolitan Statistical Area.

Part of the town is included in the census-designated place of Hatfield. 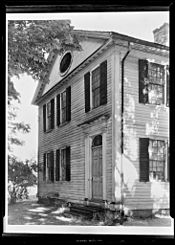 Hatfield was founded in 1660 on land granted to General Daniel Dennison and Governor William Bradford. It was formally incorporated as a town in 1670 and has a Board of Selectmen and annual town meeting.

As a center for agriculture the region produced cattle, sheep, corn, and tobacco. At first their relations with the local Native Americans were very welcoming on both sides. On October 16, 1675 a substantial part of the town was destroyed in King Philip's War, and surviving settlers sought refuge in Springfield.

During the American Revolution, Hatfield was an important source of supplies and men for the rebels. In 1786 the town was used as an assembly area for the discontented who became involved in Shays' Rebellion.

Hatfield was also the birthplace and hometown of Sophia Smith (1796-1870), the founder of both Smith Academy (the Hatfield Public High School), and Smith College, the famous women's college. Another notable resident is Rebecca Dickinson (1738-1812), a never-married gownmaker whose surviving diary, preserved in the collections of the Pocumtuck Valley Memorial Association in Deerfield, Massachusetts, has served as the basis for scholarship in early American women's history.

Hatfield is located on the west bank of the Connecticut River at the mouth of the Mill River, 25 miles north of Springfield and about 100 miles west of Boston. It is bordered to the west by Horse Mountain (a typical New England granite glacial remnant), to the north by the town of Whately and to the south by a bend in the Connecticut River, and Northampton.

There were 1,381 households out of which 27.6% had children under the age of 18 living with them, 53.1% were married couples living together, 7.5% had a female householder with no husband present, and 36.9% were non-families. 29.3% of all households were made up of individuals and 13.8% had someone living alone who was 65 years of age or older. The average household size was 2.35 and the average family size was 2.96.

All content from Kiddle encyclopedia articles (including the article images and facts) can be freely used under Attribution-ShareAlike license, unless stated otherwise. Cite this article:
Hatfield, Massachusetts Facts for Kids. Kiddle Encyclopedia.