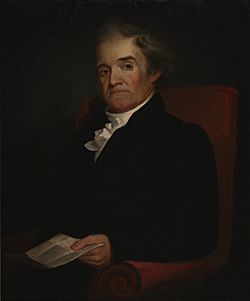 Noah Webster, Jr. (October 16, 1758 – May 28, 1843), was the author of a famous American dictionary, a pioneer of spelling, and a political writer and editor. His "Blue-backed Speller" books taught five generations of American children how to spell and read. His dictionary was first published in 1828 as An American Dictionary of the English Language.

Webster worried that his Grammatical Institute might be pirated. He had to seek copyright protection from each state. At last, on May 31, 1790, President George Washington signed the United States’ first general copyright act into law. Later, Webster lobbied for an extended copyright law. He wrote “By this bill the term of copy-right is secured for 28 years, with the right of renewal … for 14 years more. If this should become law, I shall be much benefited.” The new federal copyright law was passed and remained in effect until 1909.

All content from Kiddle encyclopedia articles (including the article images and facts) can be freely used under Attribution-ShareAlike license, unless stated otherwise. Cite this article:
Noah Webster Facts for Kids. Kiddle Encyclopedia.