Kids Encyclopedia Facts
This page is about the river in Massachusetts. For the river in Virginia, see Ware River (Virginia).

The Ware River is a 35.4-mile-long (57.0 km) river in central Massachusetts. It has two forks, the both of which (the west and the east branch) begin in Hubbardston, Massachusetts. The Ware River flows southwest through the middle of the state, joins the Quaboag River at Three Rivers, Massachusetts, to form the Chicopee River on its way to the Connecticut River.

The river was named for early fish weirs (locally pronounced). In 1928 the building of a 12.5-mile-long (20.1 km) aqueduct connecting the Ware River to the Wachusett Reservoir commenced a major public works undertaking. The 12-foot-wide (3.7 m) massive horseshoe-shaped conduit, known as the Wachusett-Coldbrook Tunnel, had to be blasted through solid rock at a depth of 200 feet (60 m). The arrival in 1931 of the first water from the Ware River by way of this tunnel probably saved the Wachusett Reservoir from drying up, for a prolonged drought had reduced Wachusett’s water supply to less than 20 percent of capacity.

In 1933 the Quabbin Aqueduct was completed, ready to transport water from the Quabbin Reservoir under construction. The Swift River Diversion tunnel is in full use, bypassing water around the dam area.

The Ware River starts at an elevation of about 830 feet (250 m) above sea level, fed from the numerous small streams within its watershed, before ending at the village of Three Rivers at an elevation of about 290 feet (88 m). The river flows through many historic mill towns where its fall towards the sea provided power. One of the largest such towns is Ware, Massachusetts, which shares its name. This river is part of the Connecticut River Watershed. 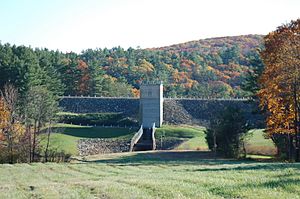 The Barre Falls Dam is located on the Ware River in Hubbardston, Massachusetts, about 0.3 miles (0.5 km) below the junction of the river's east and west branches and 13 miles (21 km) northwest of Worcester. Designed and constructed by the United States Army Corps of Engineers, this dam substantially reduces flooding along the Ware, Chicopee, and Connecticut rivers. Construction of the project began in May 1956 with completion in July 1958 at a cost of $2 million.

The Barre Falls reservoir is located within the Upper Ware River Watershed. The Massachusetts Department of Conservation and Recreation (MDCR) manages and preserves the land for water quality protection. The Massachusetts Water Resources Authority (MWRA) manages these water resources, which are part of the public water supply for the metropolitan Boston area.

All content from Kiddle encyclopedia articles (including the article images and facts) can be freely used under Attribution-ShareAlike license, unless stated otherwise. Cite this article:
Ware River Facts for Kids. Kiddle Encyclopedia.