Princeton is a town in Worcester County, Massachusetts, United States. It is bordered on the east by Sterling and Leominster, on the north by Westminster, on the northwest by Hubbardston, on the southwest by Rutland, and on the southeast by Holden. The preeminent landmark within Princeton is Mount Wachusett, which straddles the line between Princeton and Westminster but the entrance to which is within Princeton. According to tradition, in 1675, Mary Rowlandson was ransomed upon Redemption Rock, now within the town of Princeton, by King Philip. The population was 3,495 at the 2020 census. Princeton is a rural exurb, serving as a bedroom commuter town for nearby cities such as Worcester, Gardner, and Boston.

Princeton has five entries on the National Register of Historic Places: 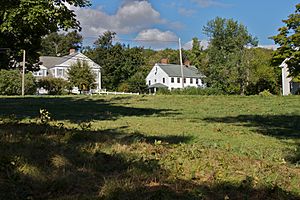 Princeton has organizations that has been created by its residents to help in many different ways.

Hearts for Heat has recently become a notable aspect of Princeton life. Founded in 2006 by Princeton resident Cindy Shea, this non-governmental organization provides heat (oil, coal, wood, electric) to residents of Princeton. After meeting 100% of fuel assistance need in Princeton, the NGO expanded to include sections in surrounding towns Spencer, Massachusetts, North Brookfield, Massachusetts, and Leicester, Massachusetts. The up-and-coming NGO's unique attributes are its community-binding nature, as well as its promise to use every dollar donated for actual fuel distributions. Recently featured on the front page of the Worcester County newspaper, the Telegram and Gazette, Shea has also found herself the focus of articles in Worcester Living Magazine, and the Landmark, Wachusett Region's newspaper. 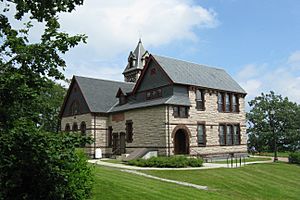 Backside of the Princeton Public Library

Princeton is part of the Wachusett Regional School District.

Princeton is served by Mount Wachusett Community College, whose main campus is located in Gardner, Massachusetts.

All content from Kiddle encyclopedia articles (including the article images and facts) can be freely used under Attribution-ShareAlike license, unless stated otherwise. Cite this article:
Princeton, Massachusetts Facts for Kids. Kiddle Encyclopedia.