Named in honor of Col. Thomas Gardner, the community was first settled in 1764 and officially incorporated as a town in 1785 after receiving land grants from the surrounding towns of Ashburnham, Westminster, Templeton and Winchendon. Dating from about 1805, it became a center for lumber and furniture industries. Gardner is known as the "Chair City" and "The Furniture Capital of New England", due to its long history in furniture production. By 1910 it had 20 chair factories which produced 4 million chairs per year. It was also noted for silversmithing. The Gardner State Colony for the Insane pioneered the use of cottage residences. Gardner was incorporated as a city in 1923.

Gardner is the birthplace of Heywood-Wakefield furniture, dating from 1826 when the five Heywood brothers began to fashion furniture in a barn near their father's farm. Brothers Walter, Levi, Seth, Benjamin and William began that year making wooden chairs. In the early years, Walter fashioned chairs by hand, also using a foot lathe. He was soon joined by his brothers Levi and Benjamin, part-time, while running a nearby country store. A new store was built across the street from the original store. In 1831 Levi moved to Boston where he established an outlet store to sell the chairs, while Benjamin and William remained in Gardner to manufacture the chairs. A fire destroyed the Heywoods' chair shop in 1834. In 1835 the partnership of B. F. Heywood & Co. was formed, composed of Benjamin, Walter and William, with Moses Wood and James W. Gates. Gardner was also the home of the Conant-Ball furniture factory. Nichols & Stone Chair Company traces their origin to 1762 in Westminster, Massachusetts. The company moved to Gardner at the turn of the 20th century. As of July 2008, it was announced they would terminate production. The Nichols & Stone name, the intellectual property and the design rights were purchased by the L. & J.G. Stickley of Manlius, New York.

The seal of Gardner was designed in 1898 by native-born illustrator Walter Harrison Cady, at the age of 21. According to the city code, the seal shows a portrayal of Col. Thomas Gardner standing in front of Crystal Lake with Mount Monadnock in the background. Within five smaller circles we see a chair, representing the importance of the furniture industry to the city's economy, as well as the letters W, W, A, and T, representing the surrounding towns of Westminster, Winchendon, Ashburnham, and Templeton which all contributed land to the city at its founding.

Gardner is bordered by Winchendon and Ashburnham to the north, Westminster to the east, Hubbardston to the south, and Templeton to the west, all in Massachusetts. 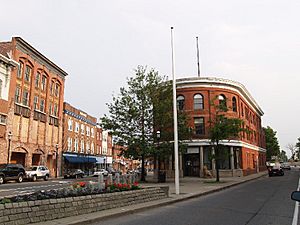 The town is home to Gardner High School, which has a student population of about 800.

A city with a historically large population speaking a second language, today approximately 5.6% of all residents speak Spanish at home while 2.8% regularly speak New England French. 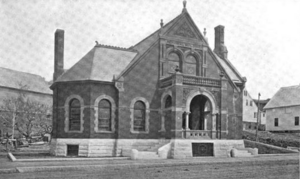 Beginning in 1871, the Boston, Barre and Gardner Railroad provided rail service to the town. Gardner station was the terminus of the MBTA's Fitchburg Line from 1980 to 1986, but the line was cut back to Fitchburg at the beginning of 1987. MART began weekday van service from Gardner to the new Wachusett terminus of the Fitchburg line in 2016.

Throughout its history Gardner was known for its furniture industry, earning its nickname as the "Chair City". While the city has undergone deindustrialization in recent decades a handful of manufacturers remain in Gardner and its neighboring towns, including Standard Chair of Gardner and the Saloom Furniture Company. The city is also home to a multinational paper and packaging manufacturer, Seaman Paper.

All content from Kiddle encyclopedia articles (including the article images and facts) can be freely used under Attribution-ShareAlike license, unless stated otherwise. Cite this article:
Gardner, Massachusetts Facts for Kids. Kiddle Encyclopedia.