Relay For Life facts for kids 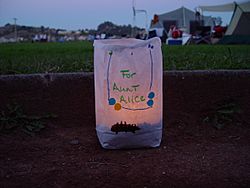 Close-up of a luminaria placed at a Relay for Life.

Relay For Life is a fundraising event for cancer held around the world. It was originally organised in the United States, by the American Cancer Society, a volunteer charity organisation. The event has now spread to more than 20 countries. The goal of the event is to raise money for cancer research and patients with cancer.

In Canada, this event is organised by the Canadian Cancer Society. Teams of 10 people compete in relays and consist of people representing corporations, communities, families and friends. The first Relay For Life in Canada was held in 1999, and raised CA$85,000. Since then, the number of relays and participants has increased each year. In 2011, $55 million was raised. To participate, one team need to be formed and registered online to the official website of the Canadian Cancer Society or with a paper form. Each member has to raise a minimum of CA$100 in donation or by selling luminaries. Luminaries are special candles that are placed in bags and carry the names of cancer survivors and loved ones who have died. In a moving ceremony after sunset, luminaries placed around the track are lit in honour of cancer survivors and in memory of those who have lost the battle against cancer.

All content from Kiddle encyclopedia articles (including the article images and facts) can be freely used under Attribution-ShareAlike license, unless stated otherwise. Cite this article:
Relay For Life Facts for Kids. Kiddle Encyclopedia.