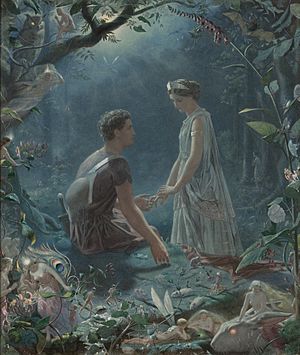 A watercolor, by John Simmons, depicting Hermia and Lysander

An illustrator is a graphic artist who specializes in enhancing written text by providing a visual representation that corresponds to the content of the associated text. The illustration may be intended to clarify complicated concepts or objects that are difficult to describe textually, or the illustration may be intended for entertainment, as in greeting cards, or cover art or interior art for books and magazines, or for advertisement, as on posters. 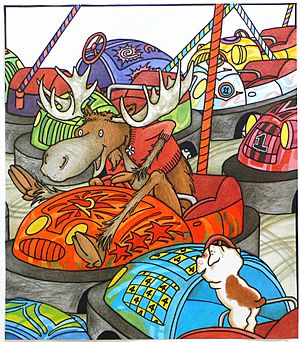 If you Give a Pig a Party illustrated by Felicia Bond

Most contemporary illustrators make their living creating artwork for use in advertising, newspapers and magazines. Pen and ink and airbrush artists traditionally dominated this realm.

Computers dramatically changed the industry, and today computers are used to produce most of the commercial illustrations. The most commonly used computer applications are Adobe Photoshop and Adobe Illustrator. Corel Painter is popular with artists desiring in a traditional media style. Also gaining popularity are 3D computer graphics programs.

However, traditional illustration techniques are still popular, particularly in the field of book illustration. Watercolor, oil painting, pastels, wood-engraving, linoleum cuts, and pen and ink are some of the techniques used by successful exponents of the art.

Scientific illustrators bring the word imagination to a new level. They create beautiful works of art from bones and fossils found by palentologist. They also create works showing animals that are difficult to photograph. These illustrations are used by museum's to spark the interest of little children everywhere.

Medical illustrators use their skills to create educational graphics about human anatomy. Their work is the result of many years of artistic and medical training.

All content from Kiddle encyclopedia articles (including the article images and facts) can be freely used under Attribution-ShareAlike license, unless stated otherwise. Cite this article:
Illustrator Facts for Kids. Kiddle Encyclopedia.