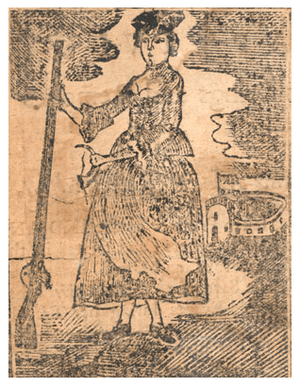 Mary Rowlandson from A Narrative of the Captivity, Sufferings and Removes of Mrs. Mary Rowlandson, Boston: Nathaniel Coverly, 1770

Mary (White) Rowlandson, later Mary Talcott (c. 1637 – January 5, 1711) was a colonial American woman. She was captured by Indians during King Philip's War. She was held in captivity for three months before being ransomed. Six years after her ordeal, she wrote The Sovereignty and Goodness of God: Being a Narrative of the Captivity and Restoration of Mrs. Mary Rowlandson. It was published in 1682. This text is considered an American leader in the literary genre of captivity narratives. It went through four printings in 1682. It was widely read in colonial New England and in England. It is considered the first American "bestseller."

Mary White was born about 1637 in Somersetshire, England. The family left England sometime before 1650. They settled at Salem in the Massachusetts Bay Colony. In 1653, they moved to Lancaster, Massachusetts. Lancaster was on the Massachusetts frontier. She married Reverend Joseph Rowlandson there in 1656. They had four children between 1658 and 1669. Their first daughter died young. 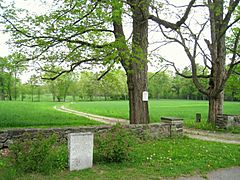 At sunrise in February 1676 during King Philip's War, Lancaster was attacked by Narragansett, Wampanoag and Nipmuc Indians. They killed 13 people. At least 24 were taken captive. Many of the captives were injured. Rowlandson and her three children, Joseph, Mary, and Sarah, were among those taken in the raid. Rowlandson's 6 year old daughter, Sarah, died from her wounds after a week of captivity. For nearly three months, Rowlandson and her children were forced to stay with the Indians. The Indians travelled through the wilderness to carry out other raids. They also wanted to hide from the English militia. Rowlandson suffered very much. She described her sufferings in great detail in her book.

On May 2, 1676, Rowlandson was ransomed for £20. The money was raised by the women of Boston. In 1677, Reverend Rowlandson moved his family to Wethersfield, Connecticut. He became pastor in April of that year. He died in Wethersfield in November 1678. Church officials gave his widow a pension of £30 per year. Rowlandson and her children moved to Boston. On August 6, 1679, Rowlandson married Captain Samuel Talcott and took his last name. She died on January 5, 1711. Rowlandson is thought to have written the story of her captivity in Boston. The original manuscript has not survived. It was published both in Cambridge, Massachusetts, and in London in 1682.

All content from Kiddle encyclopedia articles (including the article images and facts) can be freely used under Attribution-ShareAlike license, unless stated otherwise. Cite this article:
Mary Rowlandson Facts for Kids. Kiddle Encyclopedia.