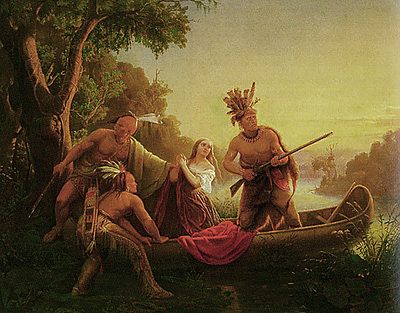 The Abduction of Daniel Boone's Daughter by the Indians, Charles Ferdinand Wimar, 1853

Captivity narratives are stories of people captured by enemies who are not civilized. Historians - people who study history - do not trust a lot of these stories. A lot of them are not written from a neutral point of view. Some historians that study Native American cultures are careful when they use these stories as sources.

Captivity narratives from North America were published through the 18th and 19th centuries. They are a part of English literature, and more stories were written in India and East Asia later on.

Colonists in New England were often captured by Canadians and their Indian allies. This was because New France and New England had competition at the time. (This happened to the Canadians as well). The number of captives taken from the fifteenth through the nineteenth centuries are unclear, however. Some think that about 1,641 New Englanders were taken hostage during King Phillip's War (1675). When the whites and Indians had conflicts in the mid-nineteenth century, hundreds of women and children were captured.

All content from Kiddle encyclopedia articles (including the article images and facts) can be freely used under Attribution-ShareAlike license, unless stated otherwise. Cite this article:
Captivity narrative Facts for Kids. Kiddle Encyclopedia.