Wendell is a town in Franklin County, Massachusetts, United States. The population was 924 at the 2020 census. It is part of the Springfield, Massachusetts Metropolitan Statistical Area.

Wendell was first settled in 1754 and was officially incorporated in 1781. It was named after Judge Oliver Wendell of Boston. The town center has been listed as a historic district on the National Register of Historic Places.

On July 11, 2006, a strong F2 tornado moved through town, starting near Wickett Pond, traveling about 2.9 miles (4.7 km), and ending about a half mile east of New Salem Road. The path varied in width from 100 to 300 yards (91 to 274 m). The tornado knocked down trees, including an old maple tree, whose falling damaged gravestones in a historic cemetery in Wendell Center. While trees were downed and some structures damaged, no one was injured.

The town has two post offices. One (zip code 01379) is located approximately one mile south of the town center on Lockes Village Road, the other is listed as "Wendell Depot" (zip code 01380) -- near the location of the old train station in the days of passenger rail -- and the town is often listed as such on maps. 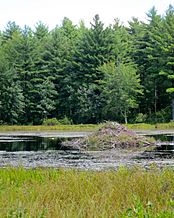 Located south of the Millers River, Wendell State Forest covers 7,566 acres of rolling forested hills, streams, ponds, and trails. Purchased in the 1920s the area had been heavily burned during the early 1900s. Some of the park development and most of the road systems are attributed to Civilian Conservation Corps activities in the 1930s. Ruggles Pond is the main day-use area. This 10 acre pond offers crystal clear water for swimming and fishing. Picnic sites and a ball field with a pavilion are located nearby. There is a small boat launching ramp located at the Northern end of Wickett Pond. The Metacomet-Monadnock Trail traverses the forest boundaries and offers a small Adirondack shelter for trail users.

There were 378 households, out of which 27.0% had children under the age of 18 living with them, 43.7% were married couples living together, 10.6% had a female householder with no husband present, and 40.5% were non-families. Of all households 28.6% were made up of individuals, and 3.7% had someone living alone who was 65 years of age or older. The average household size was 2.35 and the average family size was 2.88.

All content from Kiddle encyclopedia articles (including the article images and facts) can be freely used under Attribution-ShareAlike license, unless stated otherwise. Cite this article:
Wendell, Massachusetts Facts for Kids. Kiddle Encyclopedia.