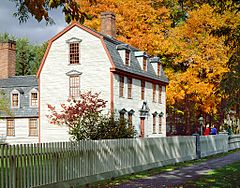 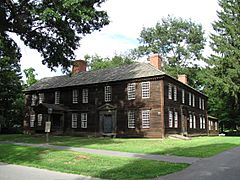 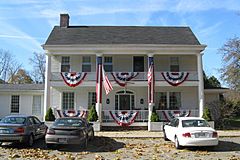 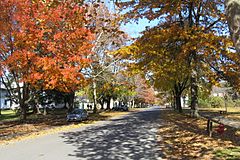 Historic Deerfield is a museum dedicated to the heritage and preservation of Deerfield, Massachusetts, and history of the Connecticut River Valley. Its historic houses, museums, and programs provide visitors with an understanding of New England's historic villages and countryside. It is located in the village of Old Deerfield which has been designated a National Historic Landmark District (as the Old Deerfield Historic District), and is listed on the National Register of Historic Places. The museum also hosts the Dublin Seminar for New England Folklife.

Eleven historic house museums are located in Historic Deerfield. Most are viewed on guided tours. A modern museum and a visitors center are part of the complex. The museum offers special exhibitions, family activities, workshops and seminars on historic subjects, and a gift shop. The Deerfield Inn is available for visitors.

Historic Deerfield is based on a 330-year-old, mile-long street situated along the Connecticut River in the Pioneer Valley of Western Massachusetts.

At the time of European contact, the area now known as Deerfield was inhabited by the indigenous Pocumtuck nation. The town was originally established as a grant of land to the residents of Dedham, Massachusetts, who had given land to the Massachusetts Bay Colony for the purpose of settling Christianized Indians.

For much of the colonial period Deerfield was one of New England's frontier villages. Briefly abandoned during King Philip's War in the 1670s, it was subjected to French and Indian raids during King William's War in the 1690s. In Queen Anne's War the village was subjected to a major raid, in which 40 percent of the population was taken prisoner. French and allied Abenaki, Mohawk, and other warriors breached the palisade and raided the village. They killed numerous settlers and took more than 100 residents captive. Before leaving for Canada, the raiding party burned the village.

Almost all of those who survived the attack and the march to Canada eventually were ransomed and returned to New England. Eunice Williams, captured at age eight, was adopted by a Mohawk family and became totally assimilated. She married a Mohawk man and had a family with him, choosing not to return to New England. In 1741 she visited surviving siblings for the first time, and she made two more visits later.

Deerfield survived the raid, and the frontier was pushed farther north and west. Settlers eventually moved into present-day Vermont and established settlements farther up the Connecticut River in New Hampshire.

All content from Kiddle encyclopedia articles (including the article images and facts) can be freely used under Attribution-ShareAlike license, unless stated otherwise. Cite this article:
Historic Deerfield Facts for Kids. Kiddle Encyclopedia.