Charlemont is a town in Franklin County, Massachusetts, United States. The population was 1,185 at the 2020 census. It is part of the Springfield, Massachusetts Metropolitan Statistical Area.

Charlemont was first settled by Moses Rice (1694-1755) who purchased 2,200 acres (8.9 km2) on 23 April 1743 that been previously set off as Boston Township Number 1 in 1735 by the Great and General Court. The town was along the distant frontier at the time, and was the subject of several raids by Native Americans. While plowing in the fields one day, Rice was shot and wounded by Indians lying in ambush. They also shot and killed another man, Phineas Arms, at the same time and captured Moses' eight-year-old grandson Asa, who had been riding the plow horse. Moses was taken to the adjoining woods, injured and left for dead, but Asa was carried off to Canada. The town was incorporated as Charlemont in 1765, most likely named for the town in Northern Ireland. The town was mostly rural, with farming being the main industry until the advent of the railroad, which traveled through town towards the Hoosac Tunnel. Today the town industry also includes tourism, with a ski area and other tourist areas along the Mohawk Trail.

In the years preceding the Revolutionary War, as Charlemont's citizens grew increasingly dissatisfied with British rule, Rev. Jonathan Leavitt was installed as the minister of Charlemont's Congregational Church. Born in Walpole, New Hampshire, and graduate of Yale College, Rev. Leavitt arrived in Charlemont in 1767, but his Loyalist sympathies grated on his congregation.

By 1777 the situation came to a stand-off: Leavitt refused to accept his salary in rapidly depreciating colonial currency. So the town voted to simply close the church, and it stationed a constable at the door to bar the offending reverend. But Leavitt would not be deterred: He moved his sermons to the schoolhouse, where he held forth until 1785, when he was finally dismissed. He sued for his salary, as well as his loss on the depreciated colonial currency, and was awarded £700.

Leavitt's descendants continued to remain in Charlemont and the surrounding region, and several—including Col. Roger Hooker Leavitt, who represented Charlemont in the Massachusetts House of Representatives, and his brother Hart Leavitt—became notable operators of stations on the Underground Railroad, sheltering many escaped slaves on their journeys northward.

Revolutionary War soldier and historian Lemuel Roberts helped his father establish a farm in Charlemont before leaving to fight in the Siege of Boston. 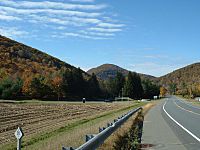 The Mohawk Trail, with Todd Mountain in the background

According to the United States Census Bureau, the town has a total area of 26.4 square miles (68.3 km2), of which 25.9 square miles (67.2 km2) is land and 0.42 square miles (1.1 km2), or 1.55%, is water. Charlemont is located in the western part of the county, with a small portion making up the western county line with Berkshire County. The town is bordered by Rowe to the northwest, Heath to the northeast, Colrain and Shelburne to the east, Buckland to the southeast, Hawley to the southwest, and Savoy and Florida to the west. Charlemont is 18 miles (29 km) west of Greenfield, 45 miles (72 km) north-northwest of Springfield, and 106 miles (171 km) west-northwest of Boston.

Charlemont's eastern border is marked by the junction of the North River and the Deerfield River, the latter flowing eastward through town. The majority of town lands lie north of the river, except for a strip along the entire Hawley town border. The town is surrounded by the eastern Berkshires, with the western part of town being dominated by Todd Mountain and the Mohawk Trail State Forest. Several other lower peaks dot the land north and town of the river, including Bald Mountain and Westfield Mountain north of the center of town, and, just over the Hawley town line, Mount Peak and Mount Institute. There are also several brooks through town, with Mill Brook lying near the town center (the site of a covered bridge).

Much of the length of the Deerfield in town is followed by the Mohawk Trail, also known as Massachusetts Route 2. Near the center of town, the road also junctions with, and shares a short, 0.6-mile (0.97 km) concurrency with Route 8A. Along the southern bank of the river, a stretch of the Guilford Rail System leads freight trains from Greenfield towards the Hoosac Tunnel in neighboring Florida, towards New York. The nearest interstate, Interstate 91, is several miles to the east along Route 2. The town lies at the westernmost point of the "Campus West" line of the Franklin Regional Transit Authority (FRTA) bus line, with scheduled stops at the Academy and at Avery's Store. The nearest regional bus and air service is in Greenfield and North Adams, the nearest Amtrak rail service is in Pittsfield, and the nearest national air service is at Albany International Airport in New York.

There were 524 households, out of which 30.7% had children under the age of 18 living with them, 50.8% were married couples living together, 12.2% had a female householder with no husband present, and 32.6% were non-families. 25.2% of all households were made up of individuals, and 8.0% had someone living alone who was 65 years of age or older. The average household size was 2.52 and the average family size was 2.99.

Charlemont and neighboring Hawley make up the Hawlemont Regional School District, a sub-district of the 9-town Mohawk Trail Regional School District, which serves much of western Franklin County. Town students attend the Hawlemont Regional Elementary School from pre-kindergarten through sixth grades, and all students in the district attend Mohawk Trail Regional High School in Buckland. There is a private academy in town, the Academy at Charlemont, and other private and religious schools in nearby towns.

All content from Kiddle encyclopedia articles (including the article images and facts) can be freely used under Attribution-ShareAlike license, unless stated otherwise. Cite this article:
Charlemont, Massachusetts Facts for Kids. Kiddle Encyclopedia.