Wales is a town in Hampden County, Massachusetts, United States. The population was 1,838 at the 2020 census. It is part of the Springfield, Massachusetts Metropolitan Statistical Area. 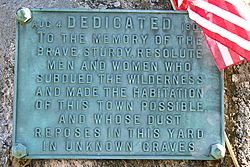 Wales was first settled in 1726 and was officially incorporated on August 23, 1775, as South Brimfield, a name it kept until February 20, 1828. The town was renamed after James Lawrence Wales, a local benefactor. Initial settlers included John Bullen, and Samuel and Dorothy Munger. The next generation of Mungers became prominent in the town. Samuel (Jr.) served as a selectman and was deacon of the Baptist Church for many years. Nathaniel was one of 12 men of the district appointed as a "court of Justice and Honor to determine all controversies that may hereafter arise in said District," and was also a deacon of the Baptist Church. The "Meadow District" of Wales was originally known as "Munger's Meadow" and includes graves of early pioneers. 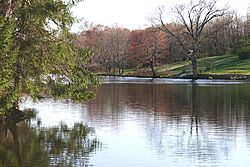 There were 660 households, out of which 33.5% had children under the age of 18 living with them, 57.4% were married couples living together, and 11.1% had a female head of household with no husband present.

All content from Kiddle encyclopedia articles (including the article images and facts) can be freely used under Attribution-ShareAlike license, unless stated otherwise. Cite this article:
Wales, Massachusetts Facts for Kids. Kiddle Encyclopedia.