Brimfield is a town in Hampden County, Massachusetts, United States. The population was 3,694 at the 2020 census. It is part of the Springfield, Massachusetts Metropolitan Statistical Area.

Brimfield was first settled in 1706 and was officially incorporated in 1731.

According to the United States Census Bureau, the town has a total area of 35.2 square miles (91 km2), of which 34.7 square miles (90 km2) is land and 0.5 square miles (1.3 km2) (1.45%) is water. Brimfield is located in Western Massachusetts. Brimfield is bordered by Sturbridge on the east, Holland and Wales on the south, Monson and Palmer on the west, and Warren on the north. U.S. Route 20 and Route 19 both run through Brimfield. Interstate 90 cuts through the northern portion of the town in two sections.

The Brimfield Public Library was established by the dog tax. This had been allowed to accumulate in the town treasury until it amounted to $709.19, when, on April 9, 1877, the town voted to devote it to establishing a free public library; and a room was specially fitted up for it in the new town house, which was built in 1879. In fiscal year 2008, the town of Brimfield spent 0.98% ($79,593) of its budget on its public library—some $21 per person. 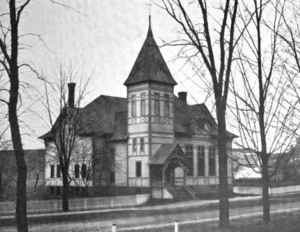 All content from Kiddle encyclopedia articles (including the article images and facts) can be freely used under Attribution-ShareAlike license, unless stated otherwise. Cite this article:
Brimfield, Massachusetts Facts for Kids. Kiddle Encyclopedia.