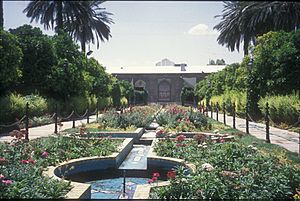 The Qavam House, where the famous Shiraz University Asia Institute was founded. Frye headed the institute from 1969 to 1974.

Richard Nelson Frye (January 10, 1920 – March 27, 2014) was an American professor. He was the Professor Emeritus of Iranian Studies at Harvard University. His professional areas of interest were Iranian philology and the history of Iran and Central Asia before 1000 CE.

All content from Kiddle encyclopedia articles (including the article images and facts) can be freely used under Attribution-ShareAlike license, unless stated otherwise. Cite this article:
Richard Nelson Frye Facts for Kids. Kiddle Encyclopedia.