Rensselaer is a city in Rensselaer County, New York, United States, and is located on the east side of the Hudson River directly opposite of Albany. As of the 2010 census, the city population was 9,392. Rensselaer is on the western border of Rensselaer County. The area now known as the City of Rensselaer was settled by the Dutch in the 17th century. The city has a rich industrial history stretching back to the 19th century, when it became a major railroad hub; In 2020, Albany-Rensselaer was the ninth busiest Amtrak station in the country. Rensselaer was one of the earliest locations of the dye industry in the United States, and was the first American location for the production of aspirin.

The natives of the area called it Petuquapoern and Juscum catick, and the Dutch claimed the land in 1609 based on Henry Hudson's exploration of the Hudson River. Later the area was called "De Laet's Burg" in honor of one of the directors of the Dutch West India Co. Settlement occurred at least as early as 1628. By 1642 there was a brewery and many farms, also a ferry was established by Hendrick Albertsen running from the mouth of Beaver Creek in Beverwyck (Albany) to the future Rensselaer. Greenbush (originally t'Greyn Bos in Dutch) was the earliest settlement from Dutch times. The hamlet of East Albany was part of the village of Greenbush. The second hamlet that would be incorporated was Bath (also Bath-on-Hudson), which was laid out in 1795 and incorporated as a village prior to 1874.

The Van Rensselaer family, which were the feudal landholders of the entire future Rensselaer County built a residence in the future city of Rensselaer. This property was inherited by Hendrick van Rensselaer, Kiliaen van Rensselaer's grandson, who built Fort Crailo in approximately 1712. It was built on the site of where Dominie Megapolensis built his own house in 1642. Crailo was expanded in 1762-1768. At various times, the grounds were used as a campground for British and colonial troops. It is reportedly the place where, in 1755, British Army surgeon Richard Shuckburgh, quartered in the home, wrote the ditty "Yankee Doodle" to mock the colonial troops who fought with the British in the French and Indian Wars. Fort Crailo was declared a National Historic Landmark in 1961.

The hamlet of Greenbush was a tract of land about one square mile in size, and is that portion of the city between Partition and Mill Street. This was purchased in May 1810 by William Akin, Titus Goodman and John Dickinson from Stephen Van Rensselaer and Stephen N. Bayard, assignees of John J. Van Rensselaer. The village was later incorporated in 1815. A new charter was granted in 1828, which was amended in 1854, and again in 1863, and a new charter in 1871. In 1897, Greenbush was chartered as a city, and its name was changed to Rensselaer. Its limits were extended in 1902 by the annexation of the village of Bath and the western part of the town of East Greenbush.

In the 19th century Rensselaer became the site of the Boston & Albany Railroad's (B&A) passenger depot, shops, freight houses, roundhouse, and coach yard. It was the site of transfers between trains of the New York Central Railroad and the B&A. A ferry transported people to and from the Van Rensselaer Island and downtown Albany at Maiden Lane. In 1871 the Maiden Lane Bridge was built replacing the ferry. In 1903 the channel that separated the island from the mainland was filled in with sand dredged from the bottom of the Hudson River. When the NY Central and the B&A merged in 1900 the island's activities became less important, though a new roundhouse and coach yard was built even as many buildings were demolished. 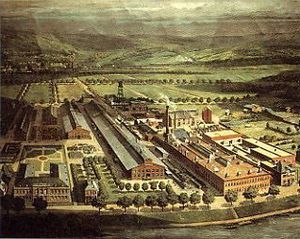 In 1882 the Hudson River Aniline and Color Works built their first plant in Rensselaer (building 61), however it burned 13 years later. In 1895 Building 61 was rebuilt and at the same time Building 71 was built as well. It would be acquired by the Bayer Corporation in 1903, which then built one of the largest and most up-to-date factories of its time in the US and the Rensselaer plant became the American home for the production of brand-name Aspirin. The US government seized the property in 1917 during World War I as enemy property, Bayer being a German company. It would later be owned by the General Aniline and Film Company, and then BASF. In 1927 it was the first plant to produce solid diazo salts in the United States. The plant went through 12 separate owners or subsidiaries in its lifetime, in the 1990s it was the oldest dye plant in continuous operation and also produced more dye than any other plant in the United States. According to a promotional brochure issued around 1993 by the BASF Corporation the Rensselaer plant was the largest North American dyestuffs production facility. The plant was shut down for good on December 28, 2000.

In 1932 next to the BASF plant, the Port of Albany-Rensselaer was built, mostly in neighboring Albany, but also with 35 acres (140,000 m2) in the southern part of Rensselaer. The docks on the Rensselaer side were built in the 1970s. 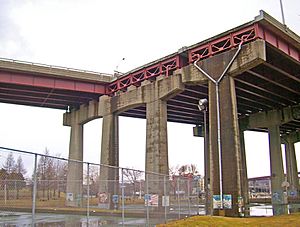 The stubs at the Dunn Memorial Bridge's Rensselaer end, built for the cancelled South Mall Expressway extension to I-90

The 1960s were a major time of change for the city of Rensselaer. In 1967 the current Dunn Memorial Bridge was built between Albany and Rensselaer. Though the bridge was to continue east through Rensselaer, with the South Mall Arterial connecting with Interstate 90 at Exit 8, this extension never materialized. In 1968 the Amtrak station in Albany (Union Station) was relocated to Rensselaer; the Maiden Lane Bridge and all the railroad associated buildings were demolished when in 1969 the Rensselaer City School high/middle school campus was built north of Quackenderry Creek.

In the 2000s, another wave of development has been occurring in Rensselaer. The Rensselaer City School campus had planned to redevelop as a mixed-use waterfront community, the developers (U.W. Marx Construction) gave the school land that had recently been annexed from a neighboring town, now in the northern section of the city, and built a new school campus. The new school replaced the Rensselaer Middle High School and Van Rensselaer Elementary, formerly Van Rensselaer High, as a K-12 facility. Doane Stuart occupies the former elementary school. The high school has been demolished, although the football field was left in for some time. The redevelopment of the waterfront property is named de Laet's Landing in honor of Johan de Laet. There has yet to be any breaking ground. The entrance to the site and parking lot is now a gated off clearing on the banks beside the Hudson, with a view of the Albany Skyline in the back. In 2002 the current Albany-Rensselaer station replaced the adjacent 1968 and 1980 stations, which have been demolished since. Today's station was built with three tracks (a fourth was planned, but eliminated due to cost) and the station has had fewer than preferable tracks since. In January 2007, it was announced that a fourth track would be built, allowing freight trains to bypass the station and reduce delays.

The former Van Rensselaer High School was listed on the National Register of Historic Places in 2012.

The Rensselaer Public Library serves the city of Rensselaer. The library is a member of the Upper Hudson Library System, a resource-sharing consortium consisting of twenty-nine public libraries in the counties of Albany and Rensselaer. In 2009, the library moved from Broadway to its current location on East Street. 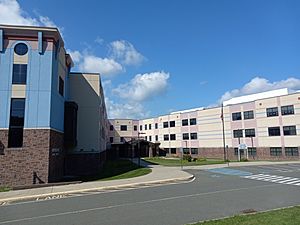 The Rensselaer City School District operates the city's public school system which consists of a single campus comprising an elementary, middle and high school. Doane Stuart is the only private school in the city. On September 16, 2009, Doane Stuart opened an interfaith campus at 199 Washington Ave. The campus which houses students in Kindergarten through 12th grade is the former location of Van Rensselaer Elementary school. 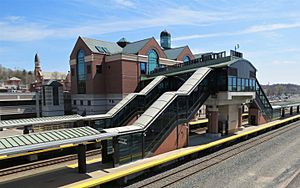 As of 2020[update] it was Amtrak's ninth-busiest station, as well as the busiest to serve a metro area with a population smaller than 2 million–a distinction it has held since at least 2010. This is primarily due to the large number of passengers who commute to and from New York City. The station is the second busiest in New York State behind Pennsylvania Station (New York City).

All content from Kiddle encyclopedia articles (including the article images and facts) can be freely used under Attribution-ShareAlike license, unless stated otherwise. Cite this article:
Rensselaer, New York Facts for Kids. Kiddle Encyclopedia.