The Wappinger were a confederacy of Native Americans whose territory in the 17th century spread along the eastern bank of the Hudson River. Primarily based in what is now Dutchess County, their territory was bordered by Manhattan Island to the south, the Mahican territory bounded by the Roeliff Jansen Kill to the north, and extended east into parts of Connecticut. Wappinger means "easterner" in most Algonquian languages.

The area was part of the Rombout Patent. In 1741, two Dutchmen, Nicholas and Adolphus Brewer, purchased 750 acres (300 ha) of land around the falls and built the first stone house in the village near the present Mill Street. In 1742, the Brewers built a mill on the east side of Wappinger Creek. Nicholas Brewer built the Mesier Homestead, which he sold in 1777 to Matthew VanBenschoten, who, in turn, sold it to Peter Mesier, a merchant from New York City.

In May 1777, soldiers and local residents attacked Peter Mesier's house in Wappingers Falls, disputing the price of tea for sale in a small store inside his home. Mesier was a merchant from New York City and a Loyalist. The angry mob struck Mesier, beat his slaves and drank wine stored in the cellar. They also took the tea and left a small amount of money behind.

The local waterfall was important for early industrial development. In 1819 a small cotton mill was built in the hollow created by the creek as it descends from Wappinger Lake to drain into the Hudson River. By 1856 it had become one of the largest printworks in the country. A fire that year destroyed the original buildings completely, but they were immediately rebuilt and continued in operation until 1931. The streets on the hillside opposite the mill are lined with frame houses, mostly duplexes, built by the mill for its workers. The two halves of the village are connected by an 1884 stone arch bridge that replaced earlier wooden structures.

The village of Wappingers Falls was incorporated in 1871 and included the adjacent community of Channingville, which was on the west side of the Wappinger Creek. The east side was known as Franklindale. In 1885 the Franklindale Cotton Mill, which employed about 130 people, was destroyed by fire; and later, during President Grover Cleveland’s second administration, the Independent Comb Factory on the corner of Fulton and Prospect Streets was forced to close. The repeal of the tariff made it impossible for the company to compete with German-made combs. In 1909, the Garner Print Works were sold and became the Dutchess Bleachery. The plant, which at times employed as many as 1,150 people, stopped printing calico but continued as a bleachery and dye works. 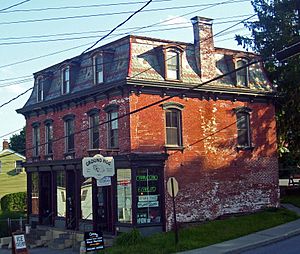 That portion of the village lying north of the creek (in the town of Poughkeepsie) was originally known as "Ednam". It later became known as Channingville (sometimes rendered "Chiningville"), which name is derived from the Channing family, who owned the farm on which it mostly lies.

The first merchant in this part of the village was a cooper, John Crilley, from Ireland by way of Glenham. In 1842 he built the first brick building erected on either side of the creek. Patrick Kennedy's North American Hotel and Eagan's Opera House (built in 1876 by John Eagan, with a seating capacity for five hundred people) were located here. The village's first post office was established here in 1840.

The Bain Commercial Building is located at the corner of Church and West Main (NY 9D) streets. The Bain family is believed to have built the building in 1875, shortly after Channingville became part of the village. It was both their residence and their place of business. It is a late 19th-century brick building that was listed on the National Register of Historic Places in 1984. 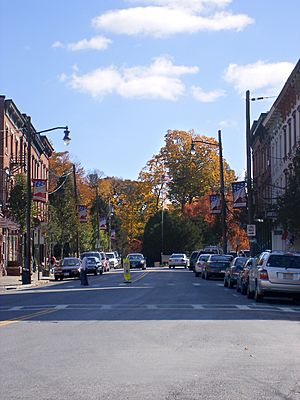 The Wappingers Falls Historic District includes downtown, several adjacent residential neighborhoods, and Mesier Park & Homestead. Mesier Park has been a public park since ca. 1891, and hosts many annual events that focus around the bandstand and tree-lined paths of the park. In 1984 the district was added to the National Register of Historic Places.

The Dutchess Company Superintendent's House is located on Market Street in the western corner of the village. It is a large brick residence that was built as housing for the manager of the Dutchess Company, a large local printing works, shortly after the plant was built in 1848. It remained in company ownership until the company failed in the 20th century. In 1984 it was added to the National Register of Historic Places. 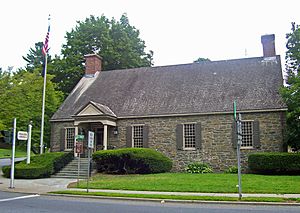 The Police Station is located at the corner of South Avenue (NY 9D) and East Main Street. It was originally built in 1940 as the village's new post office, a WPA project. President Franklin D. Roosevelt took a personal interest in the project, as he had with other new post offices in Dutchess County. He wanted it to be built of fieldstone in the style of many Dutch colonial houses in the area, and chose the Brewer-Mesier House in the village as the model for its design. The old post office, now village hall, contains two Treasury Section of Fine Arts murals by Henry Billings. The paintings show two views of the town's waterfall at different points in time, one from 1780 and the other from 1880, facing each other from opposite ends of the small building.

Zion Episcopal Church began in 1820 under the shade of an apple tree when Joanna Mesier, wife of Matthew Mesier, began a Sunday school. There were only seven or eight families living in the area at the time. The class was subsequently moved to a corn barn near the Mesier homestead where the village flagpole now stands. The Mesiers attended Trinity Church in Fishkill, the nearest Episcopal church, but felt the need for a church less distant for the farmers of the area and their families. In 1833, the Reverend Doctor George B. Andrews moved to a farm, "Highmount", between Hughsonville and New Hamburg. On July 14 of that year he conducted the first official service of the Episcopal Church somewhere on the north side of Wappingers Creek. He continued to be driven up from his farm with his family and servants to spend Sundays near the falls. In December 1833, Matthew Mesier gave a small tract of land between the burial ground and the turnpike (now Main Street) in front of what was then Mr. Givens' place. One month later plans were made to construct a church. The stone for the church came from the property of Benjamin Clapp, much of which he hauled himself. Zion Protestant Episcopal Church was dedicated by Bishop Onderdonk on May 6, 1836. Mr. Andrews served as pastor, not only to the church in Wappingers, but often found time to row across the Hudson to conduct services in Marlboro.

The Franklindale Baptist Church was organized in 1838. Benjamin Clapp, former warden of Zion Episcopal, converted to the Baptist faith and donated land on the corner of Prospect Street and South Avenue. The church building was dedicated on December 5, 1847. In 1967 the Bethel Baptist community purchased Franklindale Baptist, which was dedicated as Bethel Missionary Baptist Church on October 15, 1967. In 1997 the need for additional space brought the purchase of the house across Prospect Street, which had belonged to Dr. Kerrigan. Referred to as "Bethel Annex", the 1830s building provided space for the church school and events. In the mid-2000s, the Kerrigan House was sold and transported across South Avenue to be replaced by a new church building.

The Presbyterian Church at Wappingers Falls owes it existence to Mrs. John Fisher Sheafe, whose country seat was near New Hamburg. She asked the Rev. John D. Wells, who was then preaching at Ellessdie Chapel, situated two miles north of New Hamburg on the river road, to see if there was a need for a church in Wappingers. This resulted in the organization of the Presbyterian Society in 1848, and the same year a church edifice and parsonage were built by Mrs. Sheafe on Fulton Street. During the pastorate of Rev. O.A. Kingsbury (1879-1873) the Fulton Street property was sold and the present brick structure on South Avenue erected. The new church was dedicated July 23, 1872.

The Methodist Episcopal Church of Ednam Village was established as a mission church served by preachers who rode circuit to Middlebush and New Hamburg. In the spring of 1868, with the idea of merging the Wappingers Falls and Middlebush congregations, land was purchased from the estate of Margaret Reese. The old Middlebush church was taken down and the materials used to construct a barn on the new church property on Mesier Avenue. 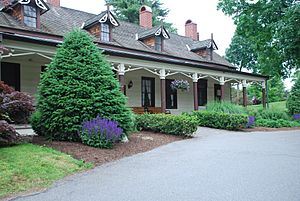 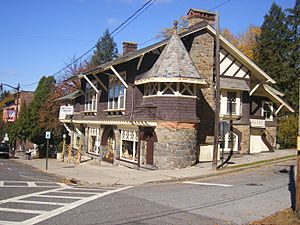 It is part of the Poughkeepsie–Newburgh–Middletown, NY Metropolitan Statistical Area as well as the larger New York–Newark–Bridgeport, NY-NJ-CT-PA Combined Statistical Area.

Entertainment and the arts

All content from Kiddle encyclopedia articles (including the article images and facts) can be freely used under Attribution-ShareAlike license, unless stated otherwise. Cite this article:
Wappingers Falls, New York Facts for Kids. Kiddle Encyclopedia.