Poughkeepsie (), officially the Town of Poughkeepsie, is a town in Dutchess County, New York, United States. As of the 2010 United States Census, the population was 43,341. The name is derived from the native term Uppuqui (oo-POO-kee) meaning "lodge-covered", plus ipis meaning "little water", plus ing meaning "place", all of which translates to "the reed-covered lodge by the little water place", or Uppuqui-ipis-ing. This later evolved into Apokeepsing, then into Poughkeepsing, and finally Poughkeepsie.

The area includes a large IBM campus noted for its ongoing development and manufacturing of IBM mainframes.

The town was first settled around 1780 and was part of the Schuyler Patent of 1788. The town of Poughkeepsie was established in 1788 as part of a general organization of towns in the county. In 1854, part of the western section of the town, already an independent village, became the city of Poughkeepsie. At least two National Historic Landmarks are located in the town: the Vassar College Observatory and the Main Building of Vassar College. 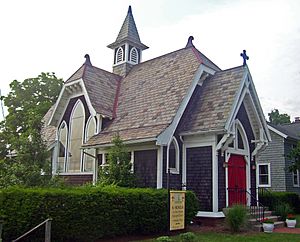 There were 14,605 households out of which 32.9% had children under the age of 18 living with them, 55.8% were married couples living together, 9.6% had a female householder with no husband present, and 30.7% were non-families. 25.0% of all households were made up of individuals and 9.6% had someone living alone who was 65 years of age or older. The average household size was 2.57 and the average family size was 3.10. 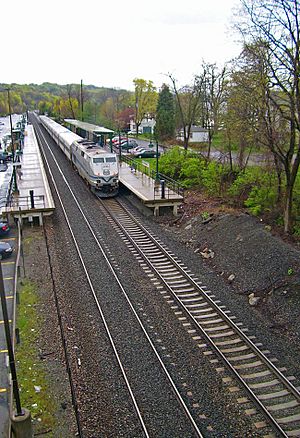 Communities and locations in or near the town of Poughkeepsie 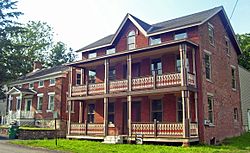 All content from Kiddle encyclopedia articles (including the article images and facts) can be freely used under Attribution-ShareAlike license, unless stated otherwise. Cite this article:
Poughkeepsie (town), New York Facts for Kids. Kiddle Encyclopedia.