New Hamburg is a small hamlet along the Hudson River in Dutchess County, New York, best known as home of a popular marina and a busy Metro-North Railroad Hudson Line station. It is located in the southern corner of the Town Of Poughkeepsie. 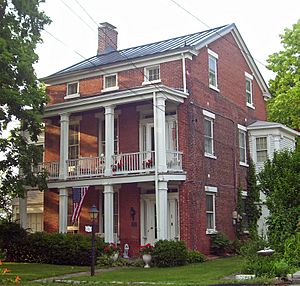 Road records of 1770 show that there were shipping facilities in New Hamburg called “Hood Landing.” The rivermen called the rocky point of land in the angle between the Hudson and the mouth of Wappinger Creek "High Point" and the area which projected into the river a few miles south "Low Point" (Chelsea).

Lime burning became an important industry. Dr. Benjamin Ely's map of 1797 shows a lime kiln in New Hamburg. By 1800 Ephraim DuBois had settled at High Point. In 1837 he sold his property, including a lime quarry and kiln, to Adolph Brower from New York. Brower's customers were local pig iron producers and farmers and builders as far away as New Jersey, supplied by river boat. He tore down the DuBois house and built his own on the same site about 1844. New Hamburg Yacht Club is now situated approximately where the "Old Lime Dock" was. The riverfront near the lime kilns was a favorite local bathing area called the "Sandy Bottom Shore.” When the railroad was built in the late 1840s, excess stone was tossed onto the naturally sandy beach area.

In 1808 John Drake Jr. built a bridge across Wappingers Creek. In 1879 an iron swing-bridge was erected, and continued to be known as "Drake's Bridge".

By 1810 John Drake had relocated to the hamlet where he had docks, a store, and 30 acres of land at High Point, then known as "Wappingers Landing". In the early 1820s, lumber surpassed lime kilns as a business. Charles Millard, who owned a lumber business based in Ulster County, moved to the Landing in 1824 and opened a lumber yard. Since most of the lumber and log shipments were made by water, Millard's son, Walter, branched out into ship building and freighting. He and a partner, Uriah Mills, built the barge Lexington, which carried freight up and down the Hudson River and the steamer Splendid, which carried both freight and passengers.

In 1848–1849 a cholera epidemic swept through the community of railroad workers and was quite fatal. The river steamer Mary Powell used to stop at New Hamburg in the morning on her way to New York and in the afternoon on the return trip.

Around 1860 William Shay operated a rag business on the corner of Main Street and Point Street. He would travel up Wappingers Creek to the mills in Wappingers Falls, and obtain rags and cotton waste for transshipment. The hamlet suffered a devastating fire on May 3, 1877, involving the loss of seven buildings.

In February 1871, on the railroad drawbridge over the Wappinger Creek (along the Hudson River) between the towns of Poughkeepsie and Wappinger in the hamlet, a train traveling north collided with an oil tank train car heading south. The trains exploded upon impact instantly throwing people, luggage, and train parts into the water. 77 people were missing or unidentified. The number of confirmed deaths was 22. Some bodies were taken to Poughkeepsie for identification, others still remain below the depths of the Wappinger Creek and Hudson River.

In 1929 the Children's Aid Society of New York operated a farm school for older boys, at Bowdoin Farm in New Hamburg N.Y. in 1929 to train boys in farm work and give them a taste of what to expect, before placing them as paid laborers on farms in the country as paid laborers.

All content from Kiddle encyclopedia articles (including the article images and facts) can be freely used under Attribution-ShareAlike license, unless stated otherwise. Cite this article:
New Hamburg, New York Facts for Kids. Kiddle Encyclopedia.