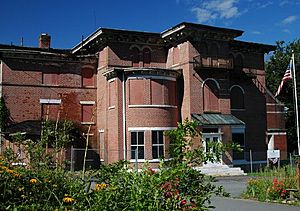 Carnwath was first constructed in 1850 by architect George Post and landscape architect Andrew Jackson Downing for William Henry and Lydia Willis. Willis was a retired hardware merchant from New York City, and related to the Mesier family of nearby Wappingers Falls. In 1855, the estate was sold to George Barclay, who died there on 28 July 1869. His daughter, Matilda Antonia Barclay married New York City attorney Francis Robert Rives. Rives was secretary of the American legation at London under ambassador Edward Everett during the William Henry Harrison administration. For a time, the road leading up to the estate was called Rives Avenue (now known as Wheeler Hill Road).

Rives was a member of both the Knickerbocker Club and the Coaching Club and made many modifications to Carnwath Manor and also constructed the carriage house, cow barn and ice house. He died at the age of sixty-nine at Carnwath on July 16, 1891 and is buried in the Wappingers Rural Cemetery. His son Reginald inherited Carnwath. Reginald Rives was an accomplished coachman and vice-president of the Coaching Club. He also had a home in Montecito, California, but would return east for club events. In 1894, Rives' coach took first prize at the Dutchess County Fair horse show, competing against that of John Jacob Astor. He was an authority on coach horses and often served as a judge at horse shows. In 1914 he sold Carnwath to Isaac Untermyer, famous for defending Boss Tweed. In 1925, it was sold to the Augustinian Friars and was known as the Novitiate of Our Mother of the Good Counsel. The friary constructed the Frances Reese Cultural Center in 1958, and the Carnwath Chapel in 1950.