Wappinger is a town in Dutchess County, New York, United States. It is in the Hudson Valley region, 70 miles (110 km) north of New York City, on the eastern bank of the Hudson River. The population was 27,048 at the 2010 census. The name is derived from the Wappinger Indians who inhabited the area.

The Wappinger were a confederacy of Native Americans whose territory, in the 17th century, was spread along the eastern shore of the Hudson River. Primarily based in what is now Dutchess County, their territory bordered Manhattan Island to the south, the Mahican territory bounded by the Roeliff Jansen Kill to the north, and extended east into parts of Connecticut.

The town of Wappinger, originally a part of the town of Fishkill, was formed on May 20, 1875, and lies wholly within the limits of the historic Rombout Patent, granted in 1685. Among the first settlers were the VanBenschotens of New Hackensack. The town of Wappinger was primarily agricultural, while mills lined the creek in the village of Wappingers Falls.

On the night of February 6, 1871, at the drawbridge in New Hamburg that crosses Wappinger Creek – where northbound trains pass from Wappinger into the town of Poughkeepsie – the Hudson River Pacific Express crashed into a passing freight train, which had broken an axle. There were 22 confirmed deaths, but while some bodies were taken to Poughkeepsie for identification, others were never recovered. 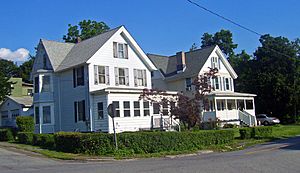 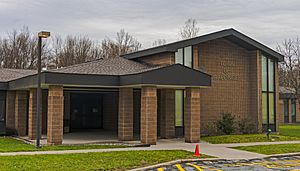 The Wappinger Town Hall, in the Middlebush area

The highest point in Wappinger is 545 feet (166 m) above sea level on a hilltop between Smithtown Road and Cedar Hill Road in the southern part of the town, and the lowest point is sea level, along the Hudson River.

There were 9,793 households out of which 34.3% had children under the age of 18 living with them, 58.1% were married couples living together, 9.4% had a female householder with no husband present, and 28.6% were non-families. 23.1% of all households were made up of individuals and 6.2% had someone living alone who was 65 years of age or older. The average household size was 2.67 and the average family size was 3.17.

All content from Kiddle encyclopedia articles (including the article images and facts) can be freely used under Attribution-ShareAlike license, unless stated otherwise. Cite this article:
Wappinger, New York Facts for Kids. Kiddle Encyclopedia.