LaGrange is a town in Dutchess County, New York, United States. The population was 15,730 at the 2010 census. The town was named after the ancestral estate of the wife of the Marquis de Lafayette. 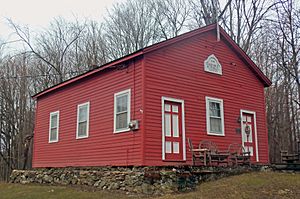 The town was originally established in 1821 as "Freedom" from parts of the towns of Beekman and Fishkill, but confusion with another location caused the name to be changed to "LaGrange" in 1828.

Three state highways bisect the town and connect it with other towns in Dutchess County and the surrounding area. The Taconic State Parkway is a north-south parkway through LaGrange. James Baird State Park, which provides a golf course, playground, sports fields, and hiking and cycling trails, is located in LaGrange along the Taconic Parkway. The parkway also serves as an important commuter road for LaGrange, connecting the town to points south, including New York City, 75 miles (121 km) distant.

New York State Route 55 is an east-west road that goes through the center of the town; Arlington High School, the Freedom Plains Presbyterian Church, and multiple shops and stores are located on a two-mile section of Route 55 in Freedom Plains, a hamlet of LaGrange. In the summer and fall of 2014, three traffic circles were added to this stretch of Route 55 in Freedom Plains in an effort to ease congestion and also to beautify this part of LaGrange. To the west, Route 55 connects LaGrange to the city of Poughkeepsie, the closest urbanized area to LaGrange; to the east, Route 55 connects LaGrange to the town of Pawling and the Route 22 corridor.

There are also several county roads that go in various parts of the town.

Freedom Park is the largest and most extensive park belonging to the town of LaGrange. At the park, there is a small, spring-fed lake in which patrons are permitted to swim under the supervision of Red-Cross-trained lifeguards. There is a set of eight 25-yard lap lanes that enables the town to support a swim team. There is a concession that sells snacks at the lake. Freedom Park also boasts a bandstand and a large, permanent, open-air pavilion; there is a small playground as well. Each summer, a day camp is offered by the town at Freedom Park.

Other parks in LaGrange include Stringham Park, an extensive complex of soccer fields located on Stringham Road in the west of the town, and James Baird State Park, which provides a golf course, playground, and cycling and hiking trails.

There were 5,085 households out of which 40.6% had children under the age of 18 living with them, 71.2% were married couples living together, 6.5% had a female householder with no husband present, and 19.3% were non-families. 15.4% of all households were made up of individuals and 5.5% had someone living alone who was 65 years of age or older. The average household size was 2.93 and the average family size was 3.28.

Communities and locations in LaGrange

Arlington High School and LaGrange Middle School of the Arlington Central School District are in LaGrange, as are several of the School District's primary, elementary and intermediate schools.

All content from Kiddle encyclopedia articles (including the article images and facts) can be freely used under Attribution-ShareAlike license, unless stated otherwise. Cite this article:
LaGrange, New York Facts for Kids. Kiddle Encyclopedia.