Hamptonburgh is a town located in the northern part of Orange County, New York, United States. The population was 5,561 at the 2010 census. It was named by an early settler, William Bull, for his place of birth — Wolverhampton.

The Town of Hamptonburgh is in the north central part of Orange County.

The town was part of patent of 1703, assigned to Christopher Denn and others.

The town was established in 1830 from parts of the Towns of Blooming Grove, Goshen, and Montgomery, including land which previously belonged to Loyalist Fletcher Mathews (brother of David Mathews who was Mayor of New York City during its occupation by the British during the American Revolution).

According to "An Outline History of Orange County" by Samuel Watkins Eager p. 378 Campbell Hall was named for Colonel Campbell who was a Scotchman, had 2 sons, and when the war of the Revolution commenced, one sided with England; the other with his adopted country. The tory brother would not speak with his republican relative. The sentiments of this brother were changed by the happy results of the revolution.

There were 1,338 family households out of which 36.3% had children under the age of 18 living with them, 76.2% were married couples living together, 5.1% had a female householder with no husband present, 3.8% had a male householder with no wife present, and 14.9% were non-families. 12.9% of all households were made up of individuals and 4.2% had someone living alone who was 65 years of age or older. The average household size was 3.43 and the average family size was 3.78. 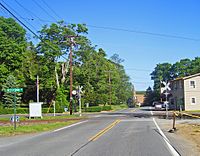 Communities and locations in Hamptonburgh

All content from Kiddle encyclopedia articles (including the article images and facts) can be freely used under Attribution-ShareAlike license, unless stated otherwise. Cite this article:
Hamptonburgh, New York Facts for Kids. Kiddle Encyclopedia.