Hopewell Junction is a hamlet and census-designated place (CDP) in Dutchess County, New York, United States. The population was 376 at the 2010 census. It is part of the Poughkeepsie–Newburgh–Middletown, NY Metropolitan Statistical Area as well as the larger New York–Newark–Bridgeport, NY-NJ-CT-PA Combined Statistical Area.

Hopewell Junction is located within the town of East Fishkill. It was originally a railroad junction where the Newburgh, Dutchess and Connecticut Railroad met the New York and New England Railroad and Dutchess County Railroad. All three became part of the New York, New Haven and Hartford Railroad system, and the ND&C to the southwest and the NY&NE are now owned by the Housatonic Railroad and used by Metro-North for equipment moves between its Hudson Line and Harlem Line. The railroad that goes through Hopewell is no longer in use; the closest one is Metro-North's Hudson Line. 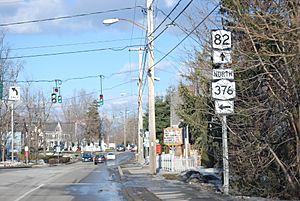 The NY 376 and NY 82 junction, which is located in Hopewell Junction

There were 894 households out of which 42.4% had children under the age of 18 living with them, 65.9% were married couples living together, 8.1% had a female householder with no husband present, and 23.0% were non-families. 19.6% of all households were made up of individuals and 5.8% had someone living alone who was 65 years of age or older. The average household size was 2.91 and the average family size was 3.37.

All content from Kiddle encyclopedia articles (including the article images and facts) can be freely used under Attribution-ShareAlike license, unless stated otherwise. Cite this article:
Hopewell Junction, New York Facts for Kids. Kiddle Encyclopedia.