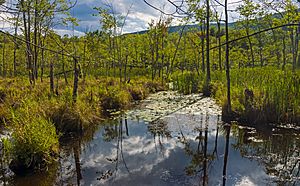 Source of Wappinger Creek at Thompson Pond in Pine Plains 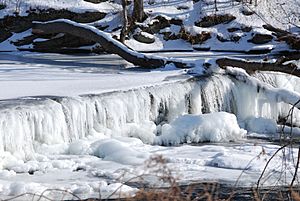 A frozen waterfall along the creek 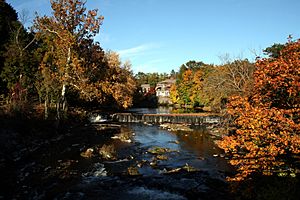 The creek flows in a north–south direction on the eastern side of the Hudson River. The creek's source is Thompson Pond near Pine Plains, and it heads southwestward towards its mouth in the Hudson River near New Hamburg. Along the way, it goes through fluctuations in width and follows an erratic path. The initial .25 mi (0.40 km) of the creek runs through rocky, steep, wooded terrain. However, as it approaches the Hudson it enters the river's tidal range, and has sandbars, mudflats and marshes. The creek is also home to numerous species, and is an important spawning area for anadromous fish, which thrive in the creek between April and June. Largemouth bass, bluegill, pumpkinseed, red-breasted sunfish, and brown bullhead, however, are resident species. Also, the creek is annually stocked with various species of trout for the purpose of recreational fishing.

Some residents and maps such as the 1867 Dutchess County Atlas refer to the creek as the Wappingers, as does the New York State Department of Environmental Conservation, the National Weather Service, and the Hudson River Riverkeeper.

All content from Kiddle encyclopedia articles (including the article images and facts) can be freely used under Attribution-ShareAlike license, unless stated otherwise. Cite this article:
Wappinger Creek Facts for Kids. Kiddle Encyclopedia.