Samuel Cooper (June 12, 1798 – December 3, 1876) was a career United States Army staff officer, serving during the Second Seminole War and the Mexican-American War. Although little-known today, Cooper was also the highest-ranking Confederate general during the American Civil War. After the conflict, he remained in Virginia as a farmer.

Samuel Cooper was born in New Hackensack, Dutchess County, New York. He was a son of Samuel Cooper and his wife Mary Horton. In 1813 he entered the United States Military Academy at age 15 and graduated 36th in a class of 40 two years later (the customary length of study in that period.) He was appointed a brevet second lieutenant in the U.S. Light Artillery on December 11, 1815. He was promoted to first lieutenant in 1821 and to captain in 1836.

In 1827, Cooper married Sarah Maria Mason, becoming the brother-in-law of future Confederate diplomat James M. Mason and later the father-in-law of Union General Frank Wheaton. Sarah's sister, Ann Maria Mason, was the mother of Confederate cavalry general Fitzhugh Lee, a nephew of Robert E. Lee, while her brother John Mason, was a son-in-law of Gen. Alexander Macomb. Cooper served as aide-de-camp for Gen. Macomb from 1828 to 1836 and under his supervision authored A Concise System of Instructions and Regulations for the Militia and Volunteers of the United States. 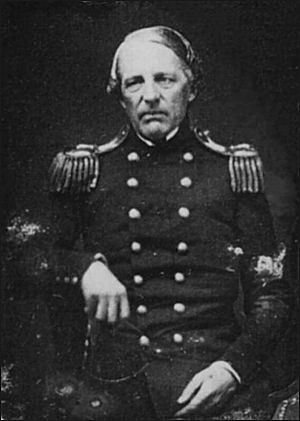 Cooper in the U.S. Army

Cooper served in numerous artillery units until 1837, when he was appointed chief clerk of the U.S. War Department. In 1838 he received a brevet promotion to major and was appointed assistant adjutant general of the Army. Nine years later, with a brevet as lieutenant colonel, he served in the same capacity.

Cooper's service in the Second Seminole War of 1841–42 was a rare departure for him from Washington, D.C. He was chief of staff for Col. William J. Worth, and after hostilities ended he returned to staff duty in Washington from 1842 to 1845. Cooper received a brevet promotion to colonel on May 30, 1848, for his War Department service in the Mexican-American War, and was promoted to the permanent rank of colonel in the regular army and appointed the army's Adjutant General on July 15, 1852. Cooper also served very briefly as acting U.S. Secretary of War in 1857.

Cooper was also a slave owner. At the time of the 1850 census, he owned six slaves.

At the beginning of the Civil War, Cooper's loyalties were with the South. His wife's family was from Virginia, and he had a close friendship with Jefferson Davis, who had also been U.S. Secretary of War. One of his last official acts as Adjutant General of the U.S. Army was to sign an order dismissing Brig. Gen. David E. Twiggs from the army. Twiggs had surrendered his command and supplies in Texas to the Confederacy (and was shortly thereafter made a Confederate major general.) This order was dated March 1, 1861, and Cooper resigned six days later. He traveled to Montgomery, Alabama, at the time the Confederacy's capital, to join the Confederate States Army.

On reaching Montgomery, Cooper was immediately given a commission as a brigadier general on March 16, 1861. He served as both Adjutant General and Inspector General of the Confederate Army, a post he held until the end of the war. Cooper provided much-needed organization and knowledge to the fledgling Confederate War Department, drawing on his years performing such duties as Adjutant General of the U.S. Army.

On May 16, 1861, Cooper was promoted to full general in the Confederate Army. He was one of five men promoted to the grade at that time, and one of only seven during the war, but with the earliest date of rank. Thus, despite his relative obscurity today, he outranked such luminaries as Albert Sidney Johnston, Robert E. Lee, Joseph E. Johnston, and P. G. T. Beauregard. Cooper reported directly to Confederate President Jefferson Davis." At the war's end in 1865, Cooper surrendered and was paroled on May 3 at Charlotte, North Carolina.

While building defenses near Washington, D.C., Union forces demolished his home and used its bricks to build a fort dubbed “Traitor’s Hill” in Cooper’s honor.

Cooper's last official act in office was to preserve the official records of the Confederate Army and turn them over intact to the United States government, where they form a part of the Official Records, The War of the Rebellion: a Compilation of the Official Records of the Union and Confederate Armies, published starting in 1880. Military historians have highly regarded Cooper for this action. Historian Ezra J. Warner believed that in doing so Cooper was "thereby making a priceless contribution to the history of the period."

After the war, Cooper was a farmer at his home, Cameron, near Alexandria, Virginia. His house had been taken over by the U.S. government during the war and turned into a fort, but he was able to move into what had been an overseer's house. Due to his age Cooper earned a meager living. On August 4, 1870, Robert E. Lee, on the behalf of other former Confederates, sent Cooper $300. Lee wrote to him saying, "To this sum I have only been able to add $100, but I hope it may enable you to supply some immediate want and prevent you from taxing your strength too much." Samuel Cooper died at his home in 1876, and is buried in Alexandria's Christ Church Episcopal Cemetery.

All content from Kiddle encyclopedia articles (including the article images and facts) can be freely used under Attribution-ShareAlike license, unless stated otherwise. Cite this article:
Samuel Cooper (general) Facts for Kids. Kiddle Encyclopedia.