Christ Church is an Episcopal church located at 118 North Washington Street in Alexandria, Virginia. Constructed as the main church in the Church of England's Fairfax Parish, the building was designed by Col. James Wren, a descendant of Sir Christopher Wren. To finance construction of the church, the Fairfax Vestry raised 31,186 pounds of Oronoco tobacco from parishioners. Construction began in 1765, under the direction of James Parsons. After four years, the church was still unfinished. The vestry relieved Mr. Parsons of his duties as overseer of the construction. John Carlyle accepted the position and handed the keys of the completed building over to the vestry in February 1773.

Initially the pews were box pews and a two-tier pulpit was situated on the north side of the sanctuary. There was no font because until after the Civil War, weddings, baptisms, and the churching of women took place at home. In the mid-nineteenth century, stoves were put in the back of the church and the box pews were converted to the slips that are in use today. During a renovation later that century, the original pulpit was replaced by the current wine-glass pulpit. The only remaining hand-carved hymnal rack is in the Lee pew. The plaques on either side of the chancel were hand-lettered by Wren and have never been retouched. They display the Decalogue, the Lord's Prayer, the Apostles' Creed, and the Golden Rule. Wren used ink and then varnished his work just as an artist varnishes a finished painting. Over time the carbon in the ink and the alcohol in the varnish formed an acetate that created the wonderful burnished patina of the plaques. If you look closely, you can see Wren's brushstrokes and one drip.

George Washington, Henry Lee, Robert E. Lee, Charles Simms, Philip Marsteller, and Henry Fowler are a few of the church's notable parishioners (members). Until the twenty-first century, it was tradition for sitting presidents to attend a service. Franklin Roosevelt, Winston Churchill, and Eleanor Roosevelt visited the church on January 1, 1942 to commemorate World Day of Prayer for Peace. The church was known as Fairfax Church until given the name Christ Church in 1816. It was declared a National Historic Landmark in 1970. 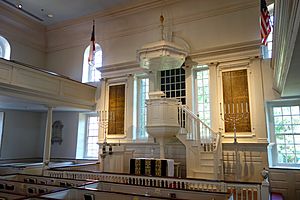 Inside front of the church

Christ Church is located in Alexandria's Old Town, at the southwest corner of North Washington and Cameron Streets. The brick two-story church measures about 60 feet (18 m) by 50 feet (15 m). Comparable to Pohick Church in Truro Parish, which was gutted by Union troops, the church has stone quoins from nearby Aquia quarry. The roof is a simple hipped structure. The galleries, bell tower, and porch were added after the original construction, circa 1785 and 1815.

The Anglican congregation that commissioned the church's construction was founded in 1765, when Fairfax Parish was established. The vestry commissioned the construction of two churches, this one, and another at Falls Church. The design of both buildings was by Colonel James Wren. The church is distinctive among Virginia's colonial churches in that its interior was spared the ravages of the Civil War. Although, most of the tombstones and all the silver were missing when the Union troop holding the church returned it two years after the end of the war. The church also survived the disestablishment of the Church of England by the commonwealth.

Among the burials in the churchyard is the mass grave of thirty-four Confederate prisoners of war who died in local hospitals during the Civil War. A memorial stone in the churchyard commemorates their deaths. Also buried in the church are Charles Simms and Philip Marstellar, two of George Washington's pallbearers, Anne Warren, a world-famous English actress, Henry Fowler, and William Ramsay, who is known as the Romulus of Alexandria.

In 2017 church leaders decided to remove plaques in memory of Washington and Lee, each of which resided on either side of its sanctuary. Removal was decided based on a purported desire to avoid "...a distraction in our worship space" and concern about creating "an obstacle to our identity as a welcoming church and an impediment to our growth and to full community with our neighbors."

All content from Kiddle encyclopedia articles (including the article images and facts) can be freely used under Attribution-ShareAlike license, unless stated otherwise. Cite this article:
Christ Church (Alexandria, Virginia) Facts for Kids. Kiddle Encyclopedia.