Kingsbridge is a residential neighborhood in the northwest portion of the Bronx, New York City. Kingsbridge's boundaries are Manhattan College Parkway to the north, the Major Deegan Expressway or Bailey Avenue to the east, West 230th Street to the south, and Irwin Avenue to the west.

The neighborhood is part of Bronx Community Board 8 and its ZIP Code is 10463. Kingsbridge is patrolled by the New York City Police Department's 50th Precinct.

Kingsbridge has detached, semi detached, and attached homes, and Broadway has apartment buildings where many Dominicans reside. Streets connecting Riverdale and Kingsbridge include "step streets", with stairways of as many as 160 steps climbing the slope. Some jokingly refer to Riverdale as the "rich uncle" of Kingsbridge which has its origins during the Irish period. The neighborhood is also part of a business improvement district that is home to 200 merchants, which is one of the largest retail shopping districts in the Bronx. River Plaza Shopping Center is located nearby (in Marble Hill, Manhattan) but it is not part of the business improvement district. During the past several years there have been significant improvements in the infrastructure of the community. For example, the parks have been improved significantly and there are new elementary schools on 230th Street. 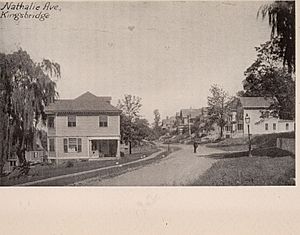 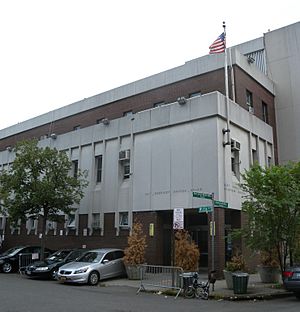 The neighborhood is named for the King's Bridge, erected in 1693 by Frederick Philipse, a local lord loyal to the British monarch. The bridge spanned a now-filled-in section of Spuyten Duyvil Creek, roughly parallel to today's 230th Street. The King's Bridge was part of Boston Post Road, connecting southern Westchester County (which later became the Bronx) with Marble Hill, once part of Manhattan Island and still part of the borough of Manhattan. The bridge is said to still be in place, having been buried when the creek bed was filled in. The creek's water flow was redirected to the new and deeper shipping canal, south of Marble Hill. 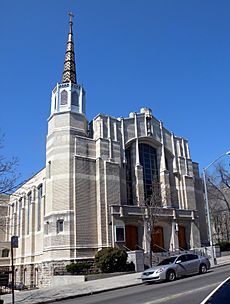 Kingsbridge has a population of over 10,000. It was once a neighborhood of predominately Irish immigrants. From the late 1970s the Irish population has decreased significantly, being replaced by large numbers of African-Americans, Hispanics, Asians, Albanians, and Greeks. The largest Hispanic group in Kingsbridge today are Dominicans, replacing the earlier Puerto Ricans and Cubans, who were the first Hispanics to settle in the neighborhood in the 1970s. There still is a strong Irish population centered on Bailey Avenue and Tibbett Avenue. The Dominicans predominantly live along Broadway and adjacent side streets, with a predominantly mixed ethnic area east and west of Broadway.

The Irish legacy can still be seen in the Roman Catholic churches and schools that serve the current residents, such as the St. John's Roman Catholic Church on Kingsbridge Avenue near 231st Street, and its two schools; the elementary school on Godwin Terrace (just south of 231st Street), and the junior high school on Kingsbridge Avenue just a block north of 231st Street. In northern Kingsbridge the Visitation Roman Catholic Church and School is located on West 239th street. To the east, on Sedgwick Avenue is Our Lady of Angels Church and School. For recreation Gaelic Park, (now operated by Manhattan College), is located on 240th Street & Broadway and is the venue for a variety of sports including Gaelic football and hurling. The neighborhood is also home to Manhattan College.

Kingsbridge was home to the 77-year-old Stella D'Oro factory, which was relocated to Ashland, Ohio when Stella D'Oro was sold to Lance after labor unrest in 2009.

The entirety of Community District 8, which comprises Kingsbridge and Riverdale, had 102,927 inhabitants as of NYC Health's 2018 Community Health Profile, with an average life expectancy of 80.9 years. This is about the same as the median life expectancy of 81.2 for all New York City neighborhoods. Most inhabitants are youth and middle-aged adults: 20% are between the ages of between 0–17, 28% between 25–44, and 25% between 45–64. The ratio of college-aged and elderly residents was lower, at 9% and 18% respectively.

Kingsbridge and Riverdale generally have a similar rate of college-educated residents to the rest of the city as of 2018[update]. While 45% of residents age 25 and older have a college education or higher, 18% have less than a high school education and 37% are high school graduates or have some college education. By contrast, 26% of Bronx residents and 43% of city residents have a college education or higher. The percentage of Kingsbridge and Riverdale students excelling in math rose from 21% in 2000 to 48% in 2011, and reading achievement increased from 28% to 33% during the same time period. 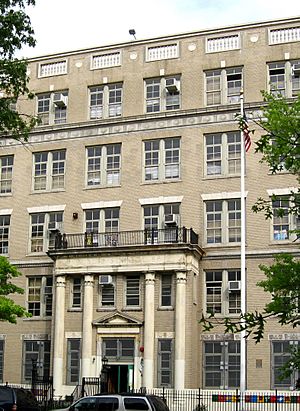 Public schools are operated by the New York City Department of Education. Kingsbridge is located near the following public elementary schools, which serve grades PK-5 unless otherwise indicated:

The following middle/high school is located in Kingsbridge:

The New York Public Library (NYPL) operates two branches near Kingsbridge. The Van Cortlandt branch is located at 3882 Cannon Place. The two-story, 5,800-square-foot (540 m2) branch opened in 2019, replacing a smaller one-story branch a few blocks away, which opened in 1969 and consisted of a single room. The Kingsbridge branch is located at 3874 Sedgwick Avenue. The current two-story building is the branch's fourth structure since the establishment of the Kingsbridge Free Library in 1894. McKim, Mead & White designed a Carnegie library for Kingsbridge when the NYPL took over the Kingsbridge branch in 1905; a third library structure was built at 280 West 231st Street in 1959, across from the current site.

All content from Kiddle encyclopedia articles (including the article images and facts) can be freely used under Attribution-ShareAlike license, unless stated otherwise. Cite this article:
Kingsbridge, Bronx Facts for Kids. Kiddle Encyclopedia.