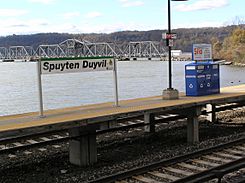 Spuyten Duyvil /ˈspaɪtən ˈdaɪvəl/ is an upper middle class neighborhood of the Bronx, New York City. It is bounded on the north by Riverdale, on the east by Kingsbridge, on the south by the Harlem River, and on the west by the Hudson River, although some consider it to be the southernmost part of Riverdale.

The area is named after Spuyten Duyvil Creek. "Spuyten Duyvil" may be literally translated as "Spouting Devil" or Spuitende Duivel in Dutch; a reference to the strong and wild tidal currents found at that location. It may also be translated as "Spewing Devil" or "Spinning Devil", or more loosely as "Devil's Whirlpool" or "Devil's Spate." Spui is a Dutch word involving outlets for water. Historian Reginald Pelham Bolton, however, argues that the phrase means "sprouting meadow", referring to a fresh-water spring.

An additional translation, "to spite the Devil" or "in spite of the devil", was popularized by a story in Washington Irving's A Knickerbocker's History of New York published in 1809. Set in the 17th Century, the story tells of trumpeter Anthony Van Corlaer summoned by Dutch colonial governor Peter Stuyvesant to warn settlers of a British invasion attempt, with Corlaer attempting to swim across the creek in treacherous conditions. The creek was referred to as Shorakapok by Lenape Native Americans in the area, translated as “the sitting down place” or “the place between the ridges”.

In 1642, Anthony Van Corlaer died while attempting to swim across the Hudson from Spuyten Duyvil A witness to Van Corlaer's death stated that "the devil" in the shape of a giant fish swam up and proceeded to "seize the sturdy Anthony by the leg and drag him beneath the waves." This may be the earliest recorded shark attack in the New World.

In the late 17th century, Frederick Philipse, the lord of Philipse Manor in Westchester County, received permission to construct a bridge across Spuyten Duyvil Creek and charge tolls. "King's Bridge", which was located roughly south of and parallel to where West 230th Street lies today, opened in 1693.

Development of the neighborhood began in the latter half of the 19th century once the New York Central and Hudson River Railroad came through. The tracks originally crossed Spuyten Duyvil Creek and into Manhattan on the west side, but Cornelius Vanderbilt wanted to consolidate his railroad operations into one terminal, so he had tracks laid along the north side of the Harlem River so that trains coming south from Albany could join with the Harlem and New Haven lines and come into Manhattan down Fourth Avenue into his new Grand Central Depot. This is the route still used by Metro-North today.

Through the 1920s development of the Spuyten Duyvil neighborhood continued. Large high-rise apartment buildings, which later became condominiums and cooperatives, began to be built in 1950s and continued through the 1980s, bringing in affluent families attracted by its scenic qualities, as well as by the area's closeness to desirable neighborhood such as Fieldston and Riverdale.

On July 18, 2013, a freight train derailed near the Spuyten Duyvil station due to an excessively wide gauge at one point. No one was killed or injured. Less than six months later on December 1, a commuter train derailment near the Spuyten Duyvil station resulted in 4 deaths and over 70 injuries, 11 of them critical. The cause of the second derailment was determined to be excessive speed.

Spuyten Duyvil is the location of the Spuyten Duyvil train station, which is served by the Hudson Line of the Metro-North Railroad, providing service into Grand Central Terminal and north into Westchester County. Spuyten Duyvil Bridge, a railroad swing bridge that carries Amtrak's Empire Corridor line between New York City and Albany, spans Spuyten Duyvil Creek. The north end of the Henry Hudson Bridge connects the neighborhood to the island of Manhattan via the Henry Hudson Parkway.

All content from Kiddle encyclopedia articles (including the article images and facts) can be freely used under Attribution-ShareAlike license, unless stated otherwise. Cite this article:
Spuyten Duyvil, Bronx Facts for Kids. Kiddle Encyclopedia.